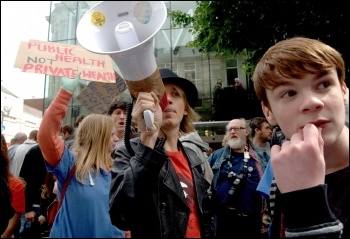 UK Uncut protest against the banks, Top Shop, and to save the NHS in Cardiff, photo Socialist Party Wales   (Click to enlarge)

'Bankers are scum', they are 'parasites', they are 'gangsters'. It has become a truism; something so widely accepted that it is hardly even worth mentioning. And yet the hatred intensifies.

As predictions for the economy worsen, cuts in jobs and much-needed public services are compounded by rising food and fuel prices. The cost of the economic crisis is piled on the heads of ordinary working and middle class people.

Working class young people suffer massively as every avenue - education, jobs, training - becomes closed off. 'Generation rent' cannot get on the housing ladder, cannot access publicly owned housing and is at the mercy of profit-seeking landlords.

Speaking of profit-seeking, recent figures expose how even the minimal demands made on the banks, in the wake of their unprecedented bailouts, are blatantly and brazenly ignored. The government claimed to be taking action and conjured up its 'Project Merlin', which was supposed to ensure banks stop withholding funds and get lending. They haven't.

Like Bullingdon clubbers in a china shop, prime minister David Cameron and chancellor George Osborne are merrily attempting to smash up the welfare state. Meanwhile they keep talking about the 'private sector-led recovery'. But small and medium businesses complain they cannot survive without credit and banks won't give them any.

The Con-Dems have refused to take decisive action against the rich, big business and the bankers. Instead they act in their interest. Expressions of our rage at this also risk becoming a cliché.

UK Uncut has tapped into this seam of anger. Its 'Emergency Operation', occupying banks to turn them into hospitals in protest at NHS cuts, vented the frustration. It graphically expressed the instinct to have control over the decisions about where public money gets spent.

Banks continue to be underwritten by the government. This 'implicit subsidy' was valued at £100 billion in 2009. Meanwhile our health service is being carved up, garnished with a sprig of parsley and handed to the private health companies and others to devour.

Protesters in the banks were expressing another truism - you can't control what you don't own. This is why we need to go further than these occupations.

Socialists call for the entire banking sector to be taken into full public ownership. This needs to be under democratic working class control. Then the vast funds of the super-rich stashed in the banks could be used to improve all our lives not just the tiny clique at the top.

Cheap loans and mortgages could transform people's lives. Money made available could be invested in jobs and services. Combining this with taking over the major companies and a democratic planned economy would mean we could invest in jobs, homes and services - and end the cuts.

This would be real nationalisation - not the abuse of the idea conducted by Gordon Brown's Labour government in 2008. To achieve it will require a mass movement, involving occupations, but also demonstrations like the magnificent show of strength on 26 March and, crucially, strike action.

The young people and workers protesting in the banks, like those in Spain, in Greece, across the Middle East and North Africa, say that we must not pay for the bankers' crisis. Fundamentally this is a crisis of capitalism. Crucial to changing our worsening conditions is the idea of a socialist alternative.