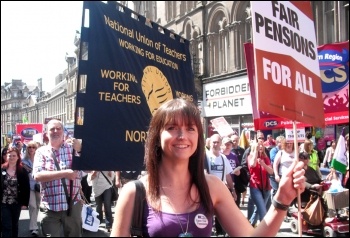 If there is one phrase that should hang around this government like a concrete necklace, it is Tory chancellor George Osborne's "We're all in this together".

Figures published by the TUC just before its 2011 Congress show that top UK bosses saw a 70% rise in their pension pots in less than a decade. What a difference to the vast majority of ordinary families, where the average rise over the same period was 30%.

But the gap becomes more obscene when actual numbers are talked about. The Independent says the five biggest pension pots of top company directors are now worth more than £84 million.

Four of those five business leaders, the bosses of Shell, Barclays, BG Group and AstraZeneca, could all retire on pensions of over £1 million a year! Compare that with those on a state pension. Currently a single person gets £102.15 a week.

According to the TUC, the average pension in local government is around £4,000 a year, and just £2,000 for women. In the civil service, the average is £6,500. The average pension for a female NHS worker is £5,000 but even that statistic is misleading. In fact, half of all women pensioners who have worked in the NHS get a yearly pension of less than £3,500!

Tory/Lib Dem proposals mean public servants would lose tens of thousands of pounds over their careers in increased contributions, reduced pay-outs, and penalties for retiring when they had originally expected to.

The bankers, whose gambling and speculation triggered the economic crisis, still get their bonuses. But ordinary people have to pay more, work longer and get smaller pensions.

In the private sector, the position for those on low or average earnings is even worse. Only one in five private sector employees earning between £100 and £200 a week are in an employer-sponsored pension scheme, compared to 70% in the same pay range in the public sector.

The real gold-plated pensions again go to the bosses. The High Pay Commission says directors of the top hundred firms in the private sector receive average pensions of £175,000 - up to 29 times the rest of the workforce. Twenty years ago the average chief executive of a top FTSE 100 company earned 17 times the average employee's pay. Today (and after 13 years of Labour government) it is more than 75 times!

Workers ARE all in this together - we need to strike together!

TUC must step up the action!

The TUC should use its authority to call on all union leaders to coordinate a date in November when three to four million public sector workers, this time including members of unions such as Unite, Unison and GMB, strike together. This should be the next step in the movement that can stop this bosses' government from slashing our living standards, jobs and pensions.

As PCS union general secretary Mark Serwotka said recently: "In June the joint strike action by PCS, teachers' unions, and some local branches of Unison and Unite, put the fight against the cuts at the centre of the nation's consciousness.

"A bigger walkout - coordinated by the TUC and involving even more unions - would boost the confidence of everybody fighting cuts in workplaces and communities across the UK. I urge PCS members and other trades unionists to join the 11 September lobby of the TUC."