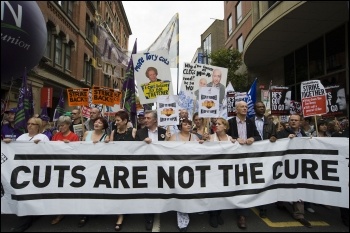 35,000 people travelled to Manchester city centre on Sunday 2nd October to march against the anti-working class policies of the Conservative party.

The Tory conference usually attracts a protest - but not on this scale. Last year for example, 7,000 protested in Birmingham.

The reason for the dramatic increase in numbers is surely down to the increasing reaction to the £81 billion cuts package that the Con-Dem coalition is trying to push through, but also the decision of the Trades Union Congress to organise the march this year. 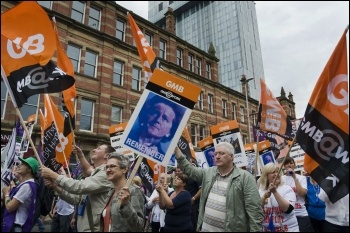 Many trade unionists were present - with a large Unison contingent. Workers currently facing battles over job losses also joined in, including a very noisy group of Remploy workers and staff from BAE Systems.

After marching to the rally point the Liverpool Socialist Singers gave a rousing rendition of The Internationale whilst the Salford and Education feeder marchers arrived. 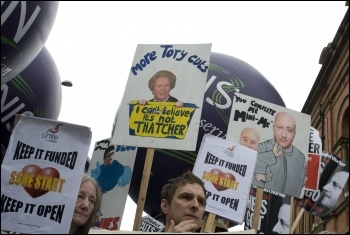 From the platform a wide range of trade union speakers and community activists spoke.

Mary Bousted (ATL) and Christine Blower (NUT), the general secretaries of the two teaching unions that took strike action to defend pensions on 30th June, spoke of their pride in the action they took and the tremendous public support they received.

Both unions have ballots secured for further strike action, with others also preparing for a ballot. 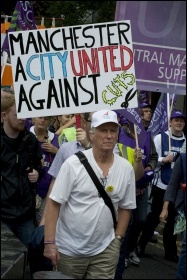 The importance of coordinating action was highlighted by Len McCluskey of Unite, the biggest union in Britain, who declared:

"We need coordinated industrial action. If you want to call that a general strike then so be it.

"We need civil disobedience. That's the oldest form of democracy. We should take the lead from the students."

Unless anything drastically changes, the coordinated strike action McCluskey talks of will happen on Wednesday 30th November - when up to 3 million workers could join the action.

Looking towards this next step, Mark Serwotka, the general secretary of the civil servants union, PCS, had a warning for the government:

'We are now on the edge of the biggest strike in Britain in 80 years ... If after the 30th of November they don't back down - carry on making cuts, carry on robbing pensions - then we have to strike again and again until we win.' 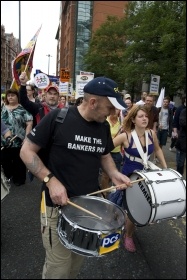 Also speaking was Tony Lloyd, Labour MP for Manchester Central, who made no mention of the anti-strike rhetoric from his leader Ed Miliband or Labour-run Manchester council, which is currently implementing the Tories' wish to cut £110 million from the budget this year. Perhaps this is why he was heckled by some!

Soon after his speech the impact of some of those cuts was mentioned by Danielle Leadbetter of Save Manchester Sure Start.

After the rally the Socialist Party held a meeting in a packed room in a pub in Great Bridgewater Street.

Judy Beishon (NEC) and Steve North (Salford branch) spoke of the importance of strike action, but also the need for a political party to fight for socialism, before the audience asked questions and made some very important contributions.

As the cuts continue to bite and strike action escalates, more workers will be attracted to the ideas of the Socialist Party.

Working class people should take heart from the numbers and the mood of this protest and go back to their workplaces and communities, confident and ready to build for the huge fight back planned on 30th November. 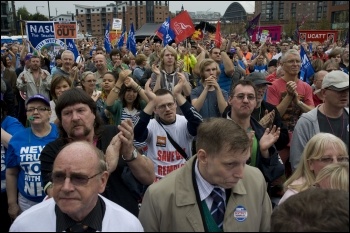 For a report of the 15,000-strong Glasgow demonstration on the same day, see:

Thousands march and prepare to strike against cuts