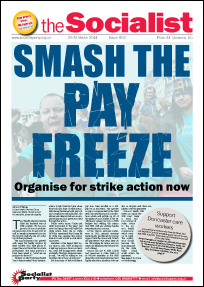 No to the bosses' EU - Yes to an independent socialist alternative

The question of a referendum over Britain's membership of the European Union (EU) is problematic for all the mainstream capitalist parties.

In this parliament Tory Prime Minister David Cameron has faced enormous pressure from the predominantly 'euro-sceptic' Tory back benches, fuelled by increased support for Ukip - a right-wing populist, anti-EU party.

Ukip are promoted by the capitalist owned media as the best stick with which to beat the pro-austerity parties.

Cameron has attempted to defuse the issue by 'promising' an in-out referendum on EU membership in 2017.

Membership of the EU will, however, be posed even more acutely for the next government, whatever its stripe.

Opinion polls on membership of the EU fluctuate, although over recent years most show a larger number saying they would vote to leave the EU than would vote to stay in.

All polls have, however, shown overwhelming support for a referendum on the issue taking place.

The Labour leadership had remained silent on this issue up until last week, when Miliband declared that a Labour-led government would only call a referendum if a future treaty revision ceded further powers to the institutions of the EU, indicating that he considered this unlikely.

Why has the Labour leadership made this electorally unpopular pledge? As it was put in the Financial Times, it is designed as "a sedative for anxious businessmen" which gives "one compelling reason to hold fire on Mr Miliband." (Janan Ganesh 15/3/2014).

Labour under Miliband - as under Blair and Brown before him - is a safe party for British capitalism. The shadow cabinet has demonstrated this again and again.

As the late Tony Benn aptly put it Labour now represents the interests of 'Great Britain PLC'. This means a Labour government would continue to attack the living standards of the majority, the working class.

Meanwhile the passing of the Collins Review - at the behest of the Tories and the right-wing capitalist media - has destroyed the last vestiges of a voice of the organised working class within the Labour Party.

Nonetheless, in order to stand a chance of winning the election, Labour has to put forward some policies that are popular with the majority, such as the promise to freeze fuel prices for 20 months.

Modest as they are (renationalising the energy companies would be far more popular, over 70% of people support it) these proposals are unpopular with the capitalist class, who object to giving up even the tiniest bit of their gigantic profits.

It is in this context that Miliband has set out to show big business that Labour is more 'reliable' for them on Europe than the Tories.

Since then the pro-EU Tories have tried to reassure big business of their own party's reliability on the issue.

The majority of the British capitalists support remaining in the EU because it is a market of 500 million people which is the UK's biggest export market.

A majority of the financial sector, which plays a dominant role in the UK economy, also consider membership of the EU helps to maintain London's status as a global centre for financial markets.

Smaller businesses, as represented by the Institute of Directors - tend to be more anti-EU, as are one wing of the financial capitalists - who dream that leaving the EU would deliver them a City of London free from even the most minimal regulation.

What attitude should socialists take to the issue? We have to support the democratic right for a referendum to be held which would give the working class a chance to oppose the bosses' EU.

In Britain, in recent years, it has been the right-wing media, Ukip and ultra-right Tory backbenchers that have been associated with opposition to the EU.

This can give the utterly false impression that opposition to the EU is the preserve of the right and is in itself reactionary or nationalist.

In fact both Tony Benn and Bob Crow, two prominent socialists who sadly died in the last week, campaigned against the EU.

Bob Crow stood for No2EU-Yes to Democracy in the 2009 European elections, while Tony Benn appeared in the election video.

No2EU was an election platform offering a working class-led internationalist opposition to the EU, which is standing again in this year's European elections under the name 'No2EU-Yes2Workers' Rights', on both occasions with the support of the Socialist Party.

Karl Marx famously declared 'workers of the world unite' because the struggle for socialism is international.

Workers across Europe - and come to that, around the world - have more in common with each other than with the capitalist class of their own countries.

That has been graphically demonstrated over the last five years, as workers in country after country - from Greece, to Spain, to Britain - have demonstrated and struck over the same issue; opposition to brutal austerity being meted out by their capitalist governments.

For those in the eurozone, in particular, their banners have also often featured demands against the institutions of the EU, which are demanding ever greater austerity for the 'periphery' of the eurozone.

The EU capitalist project is fundamentally a series of inter-governmental treaties that act in the interests of the capitalist classes.

Despite the fig leaf of a few workers' rights, the EU's directives and treaties push forward the interests of capitalism: deregulation, privatisation and the 'liberalisation' of labour markets are the norm.

The EU is an attempt to overcome the limits of developing the productive forces within Europe's nation states and to enable the different capitalist classes of Europe to compete better with other global capitalist powers and blocs.

But, as the Socialist Party has always predicted, capitalism has been proven incapable of overcoming the barriers between states and the antagonisms between the competing ruling classes.

Unity from above, in the interests of the bosses, has not created harmony and a genuine coming together of the peoples of Europe, but instead is creating inevitable recoil from the EU.

Workers in each EU country should demand that their government defy the pro-market, anti-worker EU directives and rulings.

As opposed to a capitalist bloc, socialists stand in genuine international solidarity with workers in Europe and across the world to fight for a better future.

The crisis in the eurozone is not over and will enter a new stage, with countries abandoning, or being forced out of the eurozone, or even a breakdown of the EU itself.

The Socialist Party campaigns for the working class to have its own independent position: no to the bosses' EU - for a socialist Europe.