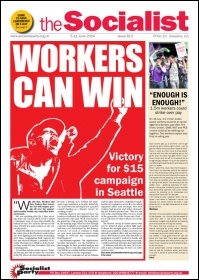 One of the main debates at PCS annual conference in May was on a possible merger with Unite the Union.

Conference showed that PCS activists and members need information, clarity and assurances that it would be in the best interests of both unions' members.

Members will expect the PCS leadership to leave no stone unturned in fighting for their interests.

Over the last 13 years PCS's left leadership has taken a serious approach to representing its members, including fighting government attacks.

Following Unite's approach, PCS has first looked at joint work and then at potential amalgamation. Last year's conference outlined the expectations that PCS would have in any formal talks with Unite.

Key is maintaining the lay democracy that the leadership team fought for when the previous right-wing was defeated.

A motion opposing any merger was defeated at this year's PCS conference. The national executive's (NEC) motion essentially sought authority to take up Unite's offer of formal talks and set out a rigorous democratic process, including full reports to the NEC and branches on the talks, a widespread consultation, a special delegate conference to debate any such proposals, and lastly, a ballot of members.

Unfortunately, the NEC motion was defeated, but an emergency motion was passed which also authorised talks with Unite.

However, the motion that was passed erroneously claimed that previous conference policy had set 'minimum pre-conditions' for talks around issues of lay democracy and the political fund.

Members are open to the potential gains of a merger but are rightly absolutely determined to protect union democracy.

A public sector group of half a million, with the existing PCS in the majority, could make a real difference to the struggle against austerity.

While PCS was influential during the pensions dispute a few years ago it was simply not strong enough to obviate the influence of the right-wing trade union leaders who engineered a shameful surrender.

Had a force, as envisaged by the joint leaderships of PCS and Unite, been in existence at that time the outcome may well have been different, not only in terms of that dispute but significantly strengthening our movement to stand against the government's austerity programme.

No serious trade unionist or socialist could disagree with this aim. But the prospect of building such a force has caused consternation in the trade union movement's right wing that is horrified by the very idea of a viable, mass alternative to their collaborationist approach.

PCS's 2013 conference gave the leadership the authority to engage in talks if approached by Unite. Since then both unions have seen a period of intense activity.

The Unite leadership has had to deal with an all-out assault by corporate gangster Ratcliffe of Ineos, aided and abetted by the Coalition government, in a naked assault on union rights.

Worse in some respects, Unite also faced a coordinated assault by the Labour leadership in an attempt to destroy the union's strategy of challenging the rightward drift of the party.

This included Ed Miliband reporting union activists to the police. Therefore, it was only just before Christmas 2013 that talks of an exploratory nature began and only in April that Unite's Executive was in a position to ratify formal talks.

Those talks were fully reported to the NEC and material has appeared in union publications and a briefing has been sent to branches.

Perhaps inevitably this hiatus meant that the conference debate lacked detail about what the new formation would look like for PCS members, causing genuine concern among some activists.

There is nothing in itself negative in this - PCS activists want to retain the best aspects and traditions of their union.

That should be welcomed by the PCS leadership - and the Unite leadership. The details can and will be resolved in formal talks.

PCS has fought back through its industrial and its political representation strategy. Its alternative, once scorned as "deficit denial", is now mainstream in the trade union movement.

This fighting tradition has bred a real commitment to lay-led democracy and a detestation of all the mainstream political parties who offer nothing but austerity, including Labour to which Unite is affiliated.

While the majority of conference delegates acted from the healthiest of motives, the political manoeuvrings of individuals and groupings disingenuously distorted the debate and played on activists' concerns.

Among those opposing the merger are some activists who for one reason or another rule out PCS joining Unite.

It can only be hoped they will engage in the debate on the basis of looking at the detail of what comes out of formal talks.

But the core of the grouping opposing merger are anti-NEC oppositionists. They invited the unsuccessful Unite general secretary candidate Jerry Hicks to speak at an anti-merger fringe meeting.

It is regrettable that Hicks did not even bother to contact anyone in the leadership of PCS to gain some idea of why it wants talks with Unite.

Bringing a union with PCS's militant history into his union should be the logical position of someone claiming to be fighting for a more 'socialist' and 'fighting' union.

Instead he came to PCS conference, critical of his own union and telling PCS members: "Don't join us."

The motion carried was constructed by the Socialist Workers Party (SWP). Unfortunately, they resorted to deliberate misinformation.

Although many delegates in the hall took action with Unite members on 10 May 2012 to defend pensions the SWP falsely claimed that Len McCluskey signed the Heads of Agreement surrender alongside Unison and the GMB in December 2011 that threw away the momentum of the huge N30 strike.

It was claimed that only Labour Party members can be Unite full-timers, a deliberate lie. In reality the SWP are opposed to a merger but they seem to recognise that outright opposition without formal talks and democratic decisions will be seen as an untenable position.

As a Socialist Party member said in the debate, we must have a sense of proportion. Listening to some contributions, you'd be forgiven for thinking the NEC was suggesting we merge with Usdaw.

One delegate argued he wasn't opposed to a merger and that it may even be necessary at some stage if PCS continues to lose members. But as every workplace representative understands, isn't it better to negotiate from a position of strength in order to gain the best terms, if it is on the correct basis?

PCS, like other organisations, has been negatively affected by the financial crisis in respect of pensions but the union is financially viable even if it is does not merge with Unite.

Finance has never been a driver in this process. Despite actually seeing an increase in its union density in the civil service, PCS has lost membership as a result of an anti-public sector austerity programme.

Under its left leadership PCS will continue to exert an influence - but it would be a bigger voice in a merged union.

Neither Left Unity nor the Socialist Party have a fixed position on the merger other than the necessity of engaging in talks and then conducting a democratic debate and allow members to decide. But we see the possibilities of a merger.

There is enormous potential for building maximum solidarity and unity in fighting austerity and the relentless attacks on the public sector and a clear industrial logic in building a campaigning public sector group that can, within the context of the biggest union in the UK, coordinate a fightback on pay, pensions, privatisation and terms and conditions.

That is why we believe the formal talks should begin.