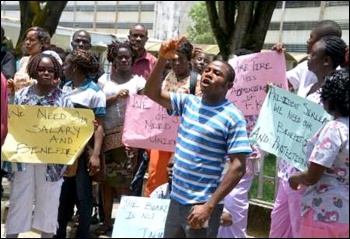 Instead, the World Health Organisation axed 300 of its 2,400 jobs in 2011. Cuts in governments' contributions slashed its budget by 20%. Its director-general, Margaret Chan, described "a new and enduring era of economic austerity".

Austerity has many faces - the uncontrolled Ebola outbreak is one more of them.

Sierra Leone's iron ore mine in Marampa is one of the country's biggest employers with 1,400 workers. Owned by London Mining, it has been building a 130-bed Ebola treatment centre. "A strengthened healthcare system is essential for safeguarding the health of our employees and our host communities," said its managing director.

But it has just gone bust! A collapse in global iron prices has pushed the company into debt, its share price falling from £4 in 2011 to 75p. Private financing of health services is at the mercy of the stock market.

A nurse in Spain and two in the USA have been infected while caring for infected patients in their hospitals. The Presbyterian hospital in Dallas, "regarded as one of the finest hospitals in Texas" according to the New York Times, failed to prevent its nurses from contracting Ebola.

Thomas Duncan - the Liberian admitted to the hospital and subsequently found to be infected - did not have medical insurance, like many poor Americans. The average cost of a day's stay in the Presbyterian is $2,766, with extra to pay for physicians and treatments.

Without insurance or Medicare/ Medicaid cover, Thomas Duncan would have had to rely on being a charity patient. Did this influence the initial decision to send him home when he first went there, complaining of fever and abdominal pain?

The USA's health care system - the most expensive in the world - failed at its first test.

Almost $400 million has been given to UN agencies and aid organisations, following an appeal launched in September for $988 million. The UN is also seeking another $1 billion for a trust fund, "to provide a flexible source of back-up money to contain Ebola."

Despite the numbers infected doubling every four weeks, after one month the trust fund had received just $100,000 - from Colombia - with $20 million pledged.

There is an urgent need for many more treatment centres, trained staff and basic infrastructure like clean water and electricity. Imperialist governments cannot be relied on to provide them. After all, they have failed to do so ever since seizing their African colonies in the nineteenth century.

Armed forces have training in useful skills and have plenty of vital equipment to quickly build treatment centres, assisting hard-pressed and over-stretched local services. But they should be democratically controlled by local committees in cooperation with elected rank and file servicemen and women - not used as a modern-day colonial force.

Workers in every country need to take charge of the aid programme. Two regions of the Unite trade union have proposed it should establish a fund for health workers in the affected countries through their unions. That is the type of support needed, sending aid to workers who know what is required, cutting out government corruption.

But trade unions do not have funds on the scale required, unlike big business which has more than enough money to bring the Ebola outbreak to an end.

However, big business will not do it. Banks, mining companies, the pharmaceutical industry and other big corporations need to be brought into public ownership and their resources used to provide aid urgently and develop vaccines and treatments.