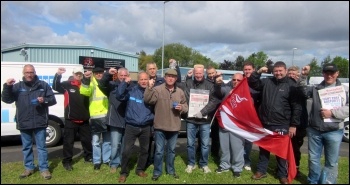 The escalation of strike action across the country by around 300 engineering service workers has thwarted attempts by bosses at Kone to use a tracking system as a disciplinary tool.

The Finnish owned company was intent on using unreliable "spy in the cab" technology. In one case the data showed that an engineer was supposed to have driven over 1,000 miles in one day without refuelling!

Previously Kone management had walked away from negotiations, which had angered workers given that it was Kone who had approached ACAS in the first place.

The Unite rep from Gateshead's Team Valley Trading Estate explained: "A framework document has now been agreed that will safeguard our members and remove the possibility of managers abusing the process to victimise our engineers".

The agreement is based on the company's Swedish model and strikers are now happy to cease industrial action from midnight on 1st June.

Strikers on the picket line have expressed the view that stepping up industrial action has played a crucial role in concentrating the minds of their bosses. One of the strikers told us of a company locally which had threatened to use zero-hour contracts. However, when within a week 200 of its workers joined a union, the company backtracked!

As we were leaving, the Unite rep said: "May I take this opportunity to officially place on record our heartfelt thanks and appreciation for all the support and contributions made to our strike fund. This was instrumental in achieving victory. We are now committed to assisting our brothers and sisters both morally and financially when the need arises".

This version of this article was first posted on the Socialist Party website on 2 June 2015 and may vary slightly from the version subsequently printed in The Socialist.

Fight back with the real socialists!