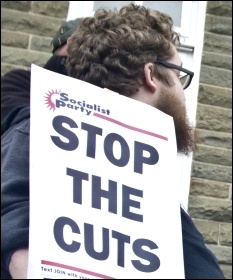 This is a devastating total on top of the huge numbers of local authority workers sacked since Osborne's austerity offensive was launched in 2010. Unison, the biggest union in local government, claims that in that period half a million council workers have lost their jobs.

When you consider that the GMB figure is from just 52 councils out of over 400, hundreds of thousands of workers could face the dole.

As we enter council budget-setting season, a much clearer picture of this catastrophe will come into view. Every job lost is yet another essential service strained to breaking point, outsourced into the private sector marketplace, or simply closed.

These developments bring into sharp focus the issue of how the local authority unions fight back against this onslaught.

Unite's Scottish secretary, Pat Rafferty, has correctly attacked the SNP-led Scottish Government for passing on Tory cuts: "Make no mistake our councils are being force-fed an austerity agenda that's been manufactured by the Tories in Westminster but delivered by the Scottish government". But there is a far more muted response by the trade unions when it comes to Labour-led councils and the Welsh Assembly Government.

Trade Unionist and Socialist Coalition (TUSC) national chair and former Socialist Party councillor Dave Nellist has written to Jeremy and John to request a discussion about working together to avoid what we consider to be a mistaken approach to the cuts. We believe that they do not appreciate the catastrophe that is facing councils, their workforces and communities. 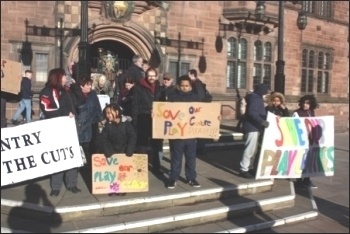 Under former Labour leader Miliband, the leaders of the council unions seemed, at best, conflicted about what to demand of Labour councils. This was reflected in their lack of support for Labour councillors who rebelled and voted against cuts.

But also, there was no coordinated national campaign of industrial action across the local authorities, meaning that every union branch largely fought alone. On top of the pulling out of the pension strike in late 2011, this lack of a serious fight only emboldened the Tories to go further.

The election of a left, anti-austerity Labour leader should have transformed the situation. But where have the demands been from the leaders of the main affiliated unions representing council and fire service workers to the new Labour leadership about calling on Labour councillors to resist?

Outgoing GMB leader Sir Paul Kenny has railed against Jeremy because of his opposition to Trident and its potential threat to 19,000 defence workers' jobs. But have he and other union general secretaries been beating a path to Corbyn's door about potentially ten times as many job losses in local government? Over 20,000 of the redundancies claimed by the GMB are in either Labour majority controlled councils or where they lead the local authority.

In contrast to some of the leaderships of the unions, the national local government committees of both Unite and Unison have passed motions from Socialist Party members which call on Labour councils to set no-cuts budgets.

The massive level of public sector cuts means that the struggle can't be postponed until Corbyn possibly wins a general election four years away. In any case, Labour is in power in over 100 councils and in Wales.

A clear anti-cuts stand that calls out to Labour councillors to resist in the council chamber and link up with the unions and communities is needed. This could build a mass movement to face down the new tidal wave of cuts and take on what is a weak Tory government.