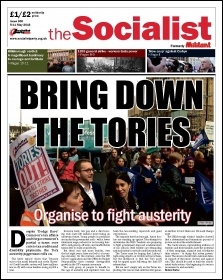 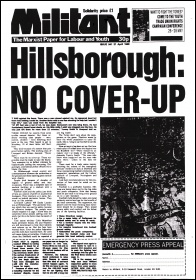 The recent verdict of the inquests into the Hillsborough football stadium disaster of 1989, which killed 96 people, has been met with jubilation by families of the victims and working class people generally - especially in Liverpool. The result vindicates the 27-year campaign for the truth, which battled against establishment lies and slurs on the victims.

The cover-up is the closest we have come in Britain to the Dreyfus Affair in France at the end of the 19th century. Then, revelations of a state conspiracy to convict a young army officer of treason led to a revolutionary upheaval.

With the current weak and divided Tory government, the Hillsborough issue has the potential to have the same effect in Britain if the labour movement put itself at the head of a fight for justice for the 96 victims.

Tony Mulhearn, who was an anti-cuts, socialist city councillor in Liverpool from 1984 to 1987, responds.

A group of us were on the junior doctors' picket line outside the Royal Hospital in Liverpool when the news came. The verdicts were announced one by one. Then came the verdict declaring the fans were exonerated from causing the catastrophe. People punched the air in celebration.

Next, the key question of 'were the victims unlawfully killed?' When 'yes' was announced the impact was incredible. People wept at the enormity of this verdict. It was as though an enormous weight was lifted from the people of the city. The years of calumny, of lies, of unfounded denunciation of Liverpool and its people, felt purged.

The verdict spectacularly confirmed the belief held by the campaigners for 27 years that there was a catastrophic failure by those responsible for crowd safety. Following this the victims and their families - and the whole city - were subject to a sustained campaign of lies and vilification by the media, the police and other agencies of the state.

The criminal role of the South Yorkshire Police, both at Hillsborough and during the miners' strike, has been well documented in the pages of the Socialist and its predecessor, Militant. Writing in the Guardian David Conn confirmed our assessment when he wrote:

"The evidence built into a startling indictment of South Yorkshire Police, their chain of command and conduct - a relentlessly detailed evisceration of a British police force... the force had brutally policed the miners' strike, and was described by some of its own former officers as 'regimented', with morning parade and saluting of officers, ruled by 'an iron fist' institutionally unable to admit mistakes.

"The dominance of Wright, a decorated career police officer who died in 2011, loomed over the catastrophe. He was depicted as a frighteningly authoritarian figure who treated the force 'like his own personal territory' and whose orders nobody - tragically - dared debate."

But perhaps the most shocking revelation is the role of Wright's placeman, Duckenfield - surely confirmed as one of history's greatest liar. As Conn remarked: "Duckenfield had not familiarised himself in any detail with the ground's layout or capacities of its different sections. He did not know the seven turnstiles, through which 10,100 Liverpool supporters with standing tickets had to be funnelled to gain access to the Leppings Lane terrace, which opened opposite a large tunnel leading straight to the central pens.

"He did not even know that the police were responsible for monitoring overcrowding, nor that the police had a tactic... of closing the tunnel when the central pens were full, and directing supporters to the sides."

Revealing his baleful outlook, Duckenfield admitted his focus before the match had been not on the need to protect people from overcrowding or crushing, but dealing with misbehaviour.

I went down to St. George's Plateau to view the giant screen that was broadcasting the unfolding events from the jury room in Warrington. The mood of the growing crowd was jubilant. The pictures of the victims' families celebrating their victory encapsulated the mood of exultation that their loved ones had been totally vindicated.

In 2012 I wrote in the Socialist "the report of the Hillsborough Independent Panel had ripped aside the tangled web of lies and cover-up woven by the South Yorkshire police, the government and the army of lickspittles in the press who denigrated Liverpool and the victims of the catastrophe."

But to see the cover-up revealed by a jury, after the longest inquest in British legal history, was like witnessing a hand grenade being exploded at the heart of a rotten, stinking, state-sponsored conspiracy.

Kelvin Mackenzie, editor of the Sun at the time of its 'The Truth' front page (akin in its level of infamy to the Daily Mail's 'Hurrah for the Blackshirts' in 1936) was visibly rattled. He was stripped of his truculence - blabbering that he had been duped by some copy received from a news agency. Thatcher's media hack Bernard Ingham, who had declared the catastrophe was the responsibility of a "tanked up mob," refused to be interviewed as he cowered in his lair.

The first casualty of the revelations, chief constable of South Yorkshire Police David Crompton, has been forced out of his job following a wave of public anger over the way his force conducted itself during the inquest.

In an interview with Radio Merseyside Labour's Andy Burnham frankly admitted that nothing would have changed were it not for a memorial meeting at Anfield in 2014. There the 25,000-strong crowd took up the chant started by Trade Unionist and Socialist Coalition candidate Roy Dixon, 'Justice for the 96!' This stopped Burnham mid-speech. One fan said that chant gave him goose bumps as it resonated throughout the ground. It was a game-changing moment.

Duckenfield's own barrister, John Beggs QC (an advocate instructed by police forces nationwide) persistently dredged up allegations of fan misbehaviour which had already been completely discredited. But he was not alone.

The present-day South Yorkshire Police force and the Police Federation also argued that Liverpool supporters outside the Leppings Lane end could be found to have contributed to the disaster because 'a significant minority' were alleged to have been drunk and 'non-compliant' with police orders to move back. The verdict confirmed that no such incidents occurred, and that there was a complete breakdown in any chain of command in the police.

Conn continued: "Many officers who made such allegations against supporters in their original 1989 accounts, which the force notoriously vetted and altered, maintained that stance under scathing challenge by the families' barristers.

"For periods, these inquests felt like an inversion of a criminal prosecution, in which police officers were repeatedly accused of lying, covering up and perverting the course of justice, while sticking insistently to their stories." That this web of lies held sway for so long was in large part down to its public endorsement by Margaret Thatcher who declared "the police were doing their job."

Because of its history of working class militancy, Liverpool has long been a target for abuse by the capitalist media. Thatcher deliberately used this catastrophe as a means of continuing the denigration of the city.

She had declared war on Liverpool because the city's Militant-led socialist council had refused to carry out her programme of cuts. The council had been successful in mobilising a magnificent campaign to defend the city, involving tens of thousands showing their support on the streets and in the ballot box. As a result we won back some £60 million from the government.

Thatcher was quoted as saying, after a visit to Liverpool, where she received a cool reception: "These people [the Liverpool councillors] have no respect for my office, and they've got to be put down."

Her government, supported by a rabid media - including Rupert Murdoch's publications, pensions thief Robert Maxwell and his Daily Mirror - and aided and abetted by Baron Kinnock and his acolytes, conducted a campaign of vilification against the whole city. Their objective was to demonstrate that a city which resists power and privilege and advances a socialist alternative must be collectively punished.

I wrote in 2012: "Not only are the families to be applauded for their courage and tenacity in the pursuit of justice, but a debt of honour is owed to them for showing that working class people, fired with courage and determination, can render the forces of the state accountable."

BBC reporter Mark Easton commenting on the event at St George's Plateau, where an estimated 30,000 paid tribute to the 96 and their families, significantly observed that "the shift in the balance of power towards the people was palpable."

The mass movement in Liverpool has succeeded in exposing one of the greatest state-sponsored cover up in history. This must now be turned into action against those who have been implicated in the investigations, including senior police officers and politicians - leaving no stone left unturned in pursuing prosecutions of those involved.