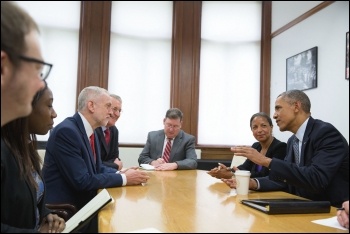 The election of Donald Trump as president of the United States contains lessons for the left internationally. It shows the horrifying consequences of the failure to build a mass working class alternative to cut across reactionary right-wing forces and ideas - and the urgency of doing so in all countries. In Britain these lessons need to be taken on board by the movement around Jeremy Corbyn.

This election exposed the myth of the right wing's idea of 'electability'. The same attack used against Jeremy Corbyn of needing a more electable 'centre ground' figure to unite around in the Labour Party was used to drum up support for Hillary Clinton. The right attacked left winger Bernie Sanders' stand against Clinton in the Democratic Party primaries, claiming Clinton was the only viable candidate to beat Trump.

The vocal, militant minority are disguising the fact that the 'silent majority' are put off by these ideas, and want someone more 'realistic' - so goes the argument. The Democratic machine threw everything it had behind Clinton, ignoring the fact that many polls showed (and continue to show in hindsight) that Sanders had a better chance of beating Trump. For them, anything was better than a Sanders victory and the hope and expectations that would raise among a radicalised working class. The same is true here. As the Socialist Party has pointed out, if an early general election is called the Blairites would prefer a Tory victory in order to undermine Corbyn's leadership.

But Clinton failed. Even the most hated candidate in the history of US presidential elections could not be defeated by the establishment Democrat candidate. Could there be any clearer sign that the era of 'the Third Way' - represented in Britain by the Blairites and in the US particularly by the Clintons - is over? It gained ground in an era where capitalism had achieved a temporary stability and the collapse of Stalinism had been used to advance the idea that neoliberalism was the only way.

But that is in the past. Working class people at the sharp end of capitalism's crisis and austerity are roaring out for something new. That's why Sanders in the US and Corbyn here have gained such support - and why they and those like them are the ones with the real potential to win elections against the populist right.

It was good that in Corbyn's statement on Trump's election he recognised it as "an unmistakable rejection of a political establishment and an economic system that simply isn't working for most people. It is one that has delivered escalating inequality and stagnating or falling living standards for the majority, both in the US and Britain." It is clear that the same rejection is taking place here - a glimpse of which was seen in the Brexit vote.

But Clinton's counterparts in Britain - ie the establishment being rejected - are in the same party as Corbyn! They are the very same right wingers attacking him at every turn and hoping for another opportunity to move against him. The US election backs up the need to boldly fight against and defeat these Blairites to create a party that stands firmly in the interests of the 99% - the kind of party that would be capable of winning against the Tories, Ukip and the far right.

Unfortunately Corbyn's statement stopped short of this. He said: "I have no doubt, however, that the decency and common sense of the American people will prevail." This implies that the vote was a moral question, rather than a political and class one. It is not 'decency' that needs to prevail but leadership and a bold fight against the right. To be successful, Corbyn and those around him need to boldly come out for a programme to transform Labour and to transform the lives of working and middle class people.

That means opening up the Labour Party to all anti-austerity forces, allowing them to affiliate on a democratic, federal basis. It means inviting back into Labour all those socialists who have been expelled or excluded from membership by the Blairite party machine. It also has to involve being clear and open about what alternative is necessary. In his statement Corbyn refers to "the need for a real alternative to a failed economic and political system". The failed system is capitalism and the alternative is socialism. Bernie Sanders won huge support for declaring himself a 'democratic socialist' and calling for a 'political revolution against the billionaire class'. We need this kind of fighting talk from Corbyn - and for it to be turned into action.

A socialist programme, including nationalising the biggest companies and banks under democratic working class control and management, is a real alternative to the chaos of the system which is leaving behind a forgotten, alienated and furious majority. Such a programme would allow the policies that have made Corbyn popular - like a £10 an hour minimum wage, building council housing and investing in, rather than cutting, public services - to become a lasting reality. Such a programme can offer an alternative vision to those who, in desperation, turn to the false promises of the right in anguish at their conditions. It can mobilise them instead to fight with Corbyn and the left.

The election of Trump should not demoralise us. It should reinvigorate our struggle for mass, socialist parties of and for working class people.