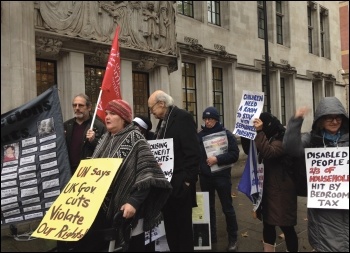 Campaigners against benefit cuts and sanctions gathered outside the Supreme Court on 9 November for the ruling in relation to seven bedroom tax cases.

This was about people who are disabled, and their carers - but also single mums and children fleeing domestic violence.

The court decided in favour of two cases concerning severe disabilities. As campaigners put it, "some justice was done".

But unfortunately the victims of domestic violence were left without any exemption by the state in relation to the bedroom tax.

A campaigner from 'Single Mothers' Self-Defence' argued this is also about children's safety. In combination with the other attacks on welfare, these women are driven into poverty. Poverty means they are not safe, and can't protect their children who are often taken away from them.

After the ruling, campaigners raised their placards and talked to the media, emphasising that the struggle continues until all justice is done, and that this government has blood on its hands.

They chanted slogans such as "axe the bedroom tax!" and "no more deaths from benefit cuts!" Some held a banner with the names of people who have died as a result of benefit sanctions.

This small victory does not mean the bedroom tax is illegal. The judiciary exists to defend the bosses' system, not challenge it.

Jeremy Corbyn has spoken against the bedroom tax and benefit cap. But he must demand Labour councils refuse to implement them. To really fight the cuts means kicking out the Blairites who back them.