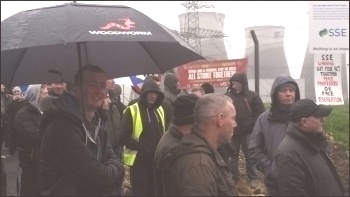 Today I was told that some companies have started employing engineering construction workers on zero-hour contracts! This is how far the 'race to the bottom' has gone. This in an industry that has - on the big sites - a national agreement, the NAECI. But the employers have been attacking, eroding, undermining and by-passing the NAECI for over a decade.

It's no wonder that 150-200 construction workers protested outside Ferrybridge power station in Yorkshire this morning. A second 'multi-fuels' project is starting at Ferrybridge, with fears that local labour will again be excluded as contracts are given to foreign companies who bring in their own core workforces.

On the first project a Croatian company paid its Croatian workers less than the NAECI rate. The unions then won the 'rate for the job' for the workers, but their bosses took the money off them when they got back home! 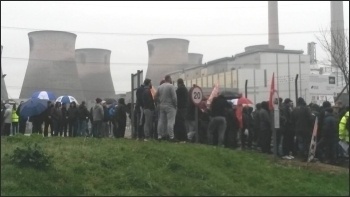 The protest was organised over social media by rank-and-file workers because of dissatisfaction with the inaction of the trade unions and the officials. Around 100 workers came from the Capenhurst site in Cheshire which is a well organised job.

The Socialist Party leaflet was well received by the protesters. One steward from Capenhurst took more copies to put up in the cabins and another said: "Thanks for coming, it's a good read that."

The Socialist Party called for:

What are we fighting for?

This version of this article was first posted on the Socialist Party website on 29 March 2017 and may vary slightly from the version subsequently printed in The Socialist.