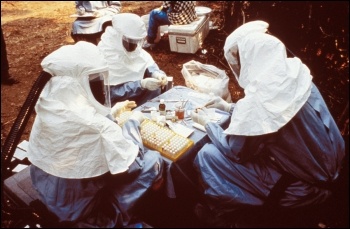 Ebola scientists testing samples, photo by US Centers for Disease Control and Prevention   (Click to enlarge)

In 2014 Salomé Karwah contracted Ebola. She survived but her parents, brother, uncles, aunts, niece, and cousins did not.

Nevertheless, on her recovery, realising that in all probability she was now immune to the disease, she volunteered at a Medecins Sans Frontiers hospital in Monrovia, capital of Liberia. At that time it was not clear that survivors have immunity to Ebola so it was a remarkably brave decision to make.

It was estimated that she helped hundreds or even thousands of people, feeding them and comforting them when it was too dangerous for others to do so. At that time Ebola nurses we being barred from renting houses out of fear of the disease.

This year Salomé was admitted to a hospital in Monrovia for a caesarean section. After complications set in she had to return to the hospital but the medical and nursing staff delayed treatment out of misplaced fear that she was still infectious. Salomé died shortly afterwards after waiting three hours in her car for treatment.

It is a tragic story which one Liberian colleague summed up: "To survive Ebola and then die in the larger yet silent epidemic of health system failure... I have no words."

But this silent epidemic is not a natural phenomenon - it was a consequence of the World Bank and International Monetary Fund (IMF) policies which forced the dismantling of what little free-at-the-point-of-need healthcare there was in West Africa in the 'Bamako Initiative' of 1987.

For many of the poorest it left them with no access to modern healthcare. Without massive fundamental change in West Africa it will stay that way and the 'silent epidemic' that killed Salomé Karwah will continue.