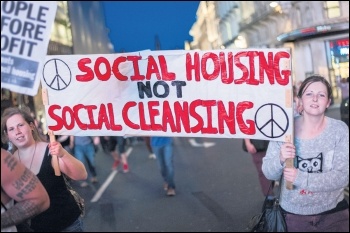 Marching against the housing crisis, photo by Paul Mattsson   (Click to enlarge)

A recent meeting of Waltham Forest Housing Action, set up by the local trades council, heard from several housing campaigns and people affected by the housing crisis. One was Claire Murphy, who told her story:

I've lived in Waltham Forest all my life. I've got two kids - my daughter is 12 and my son is ten. I was living in rented accommodation in Waltham Forest. The owner wanted to increase the rent by £600 a month because it was cheap compared to others in the area. For me that was impossible, as a working single parent.

So I was evicted on 9 March. I told the council I was homeless and I've been placed in 'emergency accommodation' outside of the borough, in Dagenham. Me and my kids are in one room in a shared house. We've got a double bed and a single bed for the three of us. For my daughter, who's just hitting puberty, it's a really big issue having no privacy, having to share with me and her brother.

Every day we have to get three buses to school and work. The room costs £176 a week. I work part time, four days a week. A three-bedroom private rental in Waltham Forest is at least £1,500 a month - that's more than my wages, without thinking about bills or food. A mortgage would be cheaper but I don't earn enough to get one.

The letter I got from the council when they placed us clearly said "this property is not suitable for you" but they're not doing anything about it. Someone else in the shared house we're in has been there for eight months.

It's all because the area is changing. If I went elsewhere maybe I could afford a nice three-bedroom but it would mean leaving behind where I was born and all my friends and family.