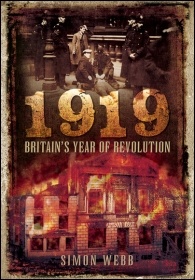 In '1919: Britain's year of revolution', Simon Webb argues the attempts of the British government to fight the new Bolshevik-led Soviet government set off discontent that swept through even the forces of the state itself.

When the police struck in 1918, Liberal prime minister David Lloyd George famously said "the country was nearer to Bolshevism that day than at any time since."

Lloyd George's wartime coalition had been reelected on a promise of speedy demobilisation of conscripts. When soldiers found they were instead to be shipped to France or Russia, they were outraged.

Strikes of soldiers and sailors also took place in Southampton, Calais and elsewhere, often with the result that troops were speedily demobilised. Around events to mark the signing of the Treaty of Versailles, a mayor's banquet in Luton ended with the storming and gutting by fire of the town hall.

Industrial disputes took place in 1919, including a railway strike, a general strike in Glasgow and another police strike. The government sent gunships up the Mersey. The spectre of a general strike called by the 'triple alliance' - miners, railway workers and transport workers - hung in the air.

Webb describes a special conference of ministers in February 1920: "We must be very clear about what was happening here. The coalition government of Lloyd George was talking of arming one section of the population to fight against another; in short, preparing for civil war. It is in this context that the recruitment of the so-called 'Citizen Guards' in October 1919 must be seen."

But for some, even these actions didn't go far enough. Webb reveals not one but two coup plots orchestrated by leading figures in the armed forces and the then secretary of state for war, Winston Churchill.

One of the strengths of the book is that it doesn't indulge in the crude denunciations of revolutionary movements as 'conspiracies' and 'undemocratic'. Instead Webb discusses how workers and soldiers formed their own elected bodies, the soviets.

"In effect, the taking of the Winter Palace was merely a symbolic act by the new power; the actual revolution had already taken place when ordinary men and women lost faith in the government and refused to support it."

Although Webb's sympathy does seem to lie with the powers that be and restoring 'order' to Britain, that doesn't mean he is unsympathetic to the problems facing ordinary people.

Ultimately, he sees 1919 as a revolutionary aberration, a period of unrest that returned to normal, calm times. But such a conclusion isn't merited by the historical record.

There was further unrest in the armed forces in the interwar period, most famously the naval mutiny at Invergordon in 1931. The 1926 general strike, which Webb dismisses, saw 'councils of action' in the North East controlling the movement of supplies.

Famously the leaders of the triple alliance met Lloyd George in February 1919, where he told them a general strike would raise the question of taking power. Miners' leader Bob Smillie said that after that they knew they were beaten.