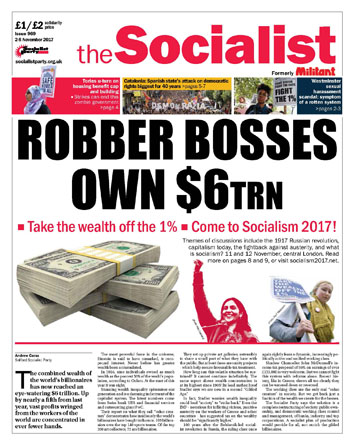 Strikes can end this zombie government

Theresa May's backtrack on capping housing benefit for social tenants is the latest in a catalogue of u-turns. The Tories are in utter disarray.

The proposed cap was responsible for an 85% fall in new home building for some of the poorest in society, according to a National Housing Federation survey. Uncertainty over the callous changes meant plans for 8,800 - a meagre sum to begin with - fell to just 1,350 built.

Of course, the Socialist Party welcomes the scrapping of the cap. But it really serves to show the Tories are feeling the heat following June's disastrous election result.

This followed Communities Secretary Sajid Javid suggesting the Autumn Statement could promise up to 300,000 new houses a year. The last Socialist remarked that he fears the power of young voters priced out of the rip-off housing market.

This proposal was, however, quickly extinguished by Chancellor Philip Hammond, who persists down the blind alley of austerity.

Like so many, I have suffered from the housing crisis. When I recently moved to Bristol, I was very excited about living there.

But I quickly found it is nigh-on impossible to rent affordably anywhere near the city centre. In fact, I discovered many young people are now resorting to living out of vans parked on the sides of streets!

London's housing situation is just as bad, if not worse. Blairite mayor Sadiq Khan has finally responded by requesting that the government quintuple London's housing grant to build "affordable" accommodation.

"Affordable" may be a stretch of the imagination. That can mean prices up to 80% of already sky-high market rates. And he says this need only represent 65% of new builds.

Khan should build the whole lot as council homes, and Corbyn should tell Labour-run boroughs to halt their knocking down of working class estates immediately.

Working class and young people's willingness to vote for an anti-austerity manifesto has got the Tories on the run. This must now be harnessed. Corbyn and the trade union leaders need to go on the offensive, with mass demonstrations and coordinated strikes, to finish off this vicious, zombie government.