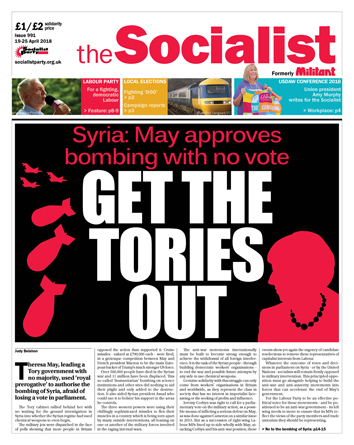 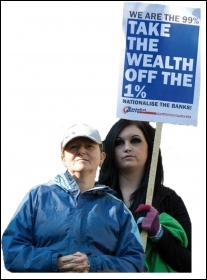 We are the 99% - Take the wealth off the 1% - Socialist Party placard, photo Paul Mattsson   (Click to enlarge)

And Amazon founder Jeff Bezos has become the planet's first hundred-billionaire, with a $106 billion personal fortune. He pipped Bill Gates to first place by adding a staggering $39 billion to his wealth in just a year.

But what about the government's commitment to reign in the tax-dodging mega-rich? "When it comes to opportunity, we won't entrench the advantages of the fortunate few," pledged Theresa May.

Yet parliament's Public Accounts Committee has found that the HM Revenue and Customs tax take from 'high net worth individuals' fell by £1 billion since the Tories set up a special unit for them. Income tax paid by all other taxpayers has risen by £23 billion over the same period.

For the Tories, it's business as usual - robbing Peter to pay for super-rich Paul. Four years ago, a PCS union-commissioned report found that £119 billion in tax was being dodged in the UK, mainly by big companies and wealthy individuals.

Let's kick out this government of the multibillionaires and fight for a socialist programme to reverse austerity and make the super-rich and their giant corporations pay to increase the living standards of the 99% through nationalisation and progressive taxation.