I was moved from HMP Nottingham, which I found out once inside is Britain's second most violent prison, to Sudbury open prison after ten and a half weeks.

I have met prisoners here that I know who arrived in Nottingham after me, but were transferred to Sudbury before me. Yet they're doing the same sentence as me!

I was investigated by the immigration department and Border Agency and their report came back 'all clear'.

I was stopped from reading the Socialist as it was not on the approved reading list. However, after complaining, they let me read it - then stopped it - and now at Sudbury I am reading it but it arrives late.

All the above games were to wear me down, but they had the opposite effect. Also people's letters and cards kept my spirits up. I have received, as of 16 May, 90 letters and 15 cards.

One prisoner told me of a prison which transports prisoners to a chicken factory. Once all the work is done - and it's hard work - the factory owners transport the chickens to Asda, Sainsbury's, and so on. The prisoners get paid well below the minimum wage.

The prisoners - and there are a lot working in the market garden - work six hours a day, Monday to Friday, and we are on 25p an hour! You can imagine - there are 83,000 prisoners in Britain, and the majority who work are working for such a slave-labour wage, no matter what job it is.

Each prisoner - and there's two to a cell - has to pay 50p a week for their TV, which goes to the TV owners, which must bring in millions of pounds. It's the same with the phone companies as prisoners pay so much to use the phones.

I don't regret showing people an old petition from TUSC's campaign against Moorways swimming pool closing. Labour in Derby later closed it, and then recently lost control of the council. I was proud of Derby TUSC's campaign. 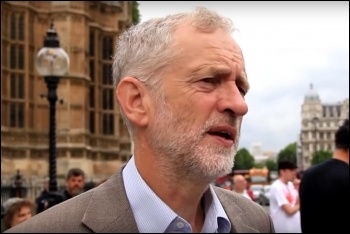 "After eight years of budget cutting," it begins, "Britain is looking less like the rest of Europe and more like the United States, with a shrinking welfare state and spreading poverty."

It speaks volumes about the shallow politics of liberalism that newspapers like the NYT - and the Guardian in this country - are capable of producing such withering criticisms of austerity, while failing to support - even smearing and attacking - those fighting against it.

The NYT was a constant champion of the pro-austerity warmonger Hillary Clinton in the race for the Democratic leadership in 2016. Similarly, the Guardian has relentlessly sought to undermine Jeremy Corbyn's leadership of the Labour Party - at the same time as lamenting the horrors of austerity. Bernie Sanders received similar treatment in the US.

"A wave of austerity has yielded a country that has grown accustomed to living with less, even as many measures of social wellbeing - crime rates, opioid addiction, infant mortality, childhood poverty and homelessness - point to a deteriorating quality of life."

The truth is that the liberal establishment may shed a tear over the effects of austerity - but as they are so completely wedded to the interests of big business, for them there is no real alternative.