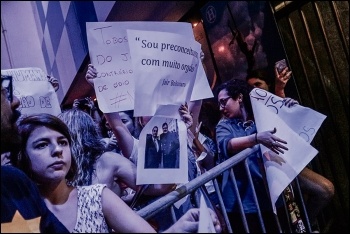 Brazil's most polarised and unpredictable election campaign in recent history has ushered in a new era for the country.

This development poses a clear threat to the working class and will pose new challenges for the workers' movement.

Between 42% and 46% of the electorate say they wouldn't vote for him under any circumstances and a significant level of abstention took place.

In São Paulo it increased its number of federal deputies from one to four. PSOL's campaign has involved thousands of supporters of social movements.

But it suffered from the enormous pressure for lesser-evilism to defeat Bolsonaro. The fear of Bolsonaro's victory has tended to outweigh the enormous sympathy which exists for the PSOL candidates.

His rejection ratings are 52% among women compared to 38% among men. Already, 'anti-Bolsonaro' committees have been formed in many areas.

Bolsonaro's social base is mainly made up of older men from the middle classes and richer strata of society, concentrated in south and south eastern Brazil, where there is a bigger middle class.

Rejection of Bolsonaro is very high among women and the poorest - 55% of those who make less than double the minimum wage - and in the north east, where he is rejected by 61%.

During this campaign Bolsonaro has adopted more explicit neoliberalism, distancing himself from 'strong-state nationalism' which was typical of a section of the Brazilian military, including during the 1964-1985 dictatorship.

He links the "left" with corruption. He adds to this an image of someone who will confront the problem of 'security' with an iron fist.

The sentiment of opposition to the system has predominantly so far been captured by the right wing - mostly due to the limits and slow pace of building a new radical anti-capitalist and socialist left. 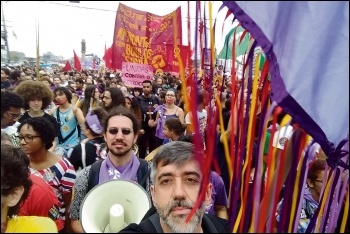 The opposition to Bolsonaro is still dominated by the Workers' Party (PT - the former ruling party of Lula da Silva and Dilma Rousseff), characterised by the defence of class collaboration and institutional actions which are not differentiated from the rotten political system.

The PT emerged as the largest block in the Chamber of Deputies with 57 MPs. The PT's Presidential candidate, Fernando Haddad, finished second.

They were facing popular opposition to the austerity imposed by Dilma. This has been their approach in the struggle against impeachment and in the 'Fora Temer' (Temer Out) movement.

The PT tries to convince the ruling class that Bolsonaro is too risky. The Brazilian capitalist class did everything it could to establish a trustworthy candidate - one more organically linked to the ruling class with a clear neoliberal programme.

However, they failed in this project. Geraldo Alckmin - candidate for the Social Democratic Party, the main party of the Brazilian capitalists - got less than 5% support.

These people will become politicised and ever-greater numbers will understand the limits of the PT - opening up greater opportunities for the socialist left, which is not soaked in class collaboration, to make big gains.