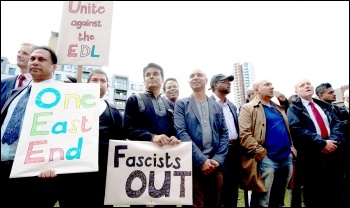 Robinson (real name Stephen Yaxley-Lennon) explained his resignation by saying: "I have been considering this move for a long time because I recognise that, though street demonstrations have brought us to this point, they are no longer productive."

EDL demonstrations have often been met with counter-protests by anti-racists and socialists, and it is an important admission by Robinson that the EDL's street marches are failing.

However, these resignations do not represent a change in Robinson's reactionary political outlook. The resignations were facilitated and publicised by Quilliam, founded by several ex-Hizb ut-Tahrir members, a far-right political Islamist group.

In interviews, Robinson has cited the drinking culture and fascist sympathies of many EDL activists as his reasons for leaving. But these have been features of the EDL since its inception, despite the leadership's claims to be non-racist.

The resignation of two of the EDL's most prominent members will likely reinforce the EDL's disintegration and collapse. After being outnumbered several times - such as the attempt to march in Walthamstow, east London, where local youth and protesters broke through police lines to stop the EDL holding a rally - attendance at EDL rallies was in decline.

Other far-right groups, such as the 'infidels', split away from the EDL after an acrimonious falling out with Robinson and Co. However, since Robinson resigned, these far-right groups including remnants of the National Front, the infidels and others, have made overtures to the new EDL leadership.

With the government's vicious austerity cuts and with Westminster parties promoting racist ideas, there is still potential support for racist and far-right ideas to grow and take shape, as has happened in Greece. Building a mass, united working class fightback against all cuts and against racism is vital.