From: Article posted to home page Home, 15 May 2018: Socialist Party news and analysis 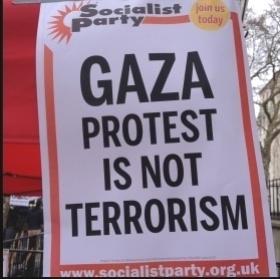 While the move of the US embassy to Jerusalem was celebrated in that city by Trump's daughter Ivanka and other super-wealthy representatives of the US government, a terrible massacre was taking place in Gaza of Palestinian protesters.

Sixty were killed and over 1,400 suffered gunshot wounds on Monday 14th May, during protests against the moving of the embassy.

Tens of thousands of unarmed protesters near the Gaza fence were met with snipers, tear gas and tanks.

"A glorious day" was the obscene verdict of Israeli prime minister Netanyahu.

The death toll is likely to increase, as more demonstrations take place on 15th May to mark the Palestinian Nakba (catastrophe) - the forcing out of over 750,000 Palestinians from their homes 70 years ago, when Israel was founded.

Since then they, and those made homeless in the 1967 war, have faced dispersion, terrible conditions and massive poverty.

Daily life across the occupied territories - Gaza, the West Bank and East Jerusalem - is under brutal repression by the Israeli military, with regular house demolitions and incursions by Israeli soldiers during which killings and arrests are shockingly normal.

Trump's move of the US embassy has poured fuel on the fire of mass anger, as it's designed to support Israeli domination of the city which would need to be a shared capital with the Palestinians in a two-states solution to the national conflict.

But with none of the mainstream Israeli political parties offering a solution to the conflict, a majority of the population presently falls prey to the reactionary mood propagated from above. 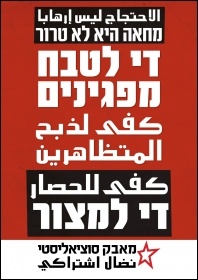 Placard of Socialist Struggle Movement in Israel-Palestine: “Protest is not terrorism; Stop the slaughter of protesters; End the siege”.   (Click to enlarge)

Netanyahu's government has directed a barrage of propaganda at the Gaza protesters, labelling them 'terrorist', ordered by Hamas, and a dire threat to Israelis.

They have been none of these - rather they are mass protests of men, women and children against the blockade of Gaza and the prison-like conditions they have been forced into.

In the face of the deadly actions of Israel's military, the Gazans' struggles clearly need to be very well organised; and democratically run, assessed and escalated to achieve the maximum potential impact and success.

Mass actions aimed against the occupation can be very effective, as the first intifada (uprising) - which broke out in 1987 - showed.

And the Palestinians have the right to arm themselves for their defence. At the same time, their struggle would be strengthened by making a concerted appeal to ordinary Israelis, helping to divide them from reactionary Israeli parties, explaining that they are not the target, rather it is the removal of the brutal occupation and blockades.

Working class and middle class people on both sides of the divide have nothing to gain from the conflict, or from the low or unstable living standards that the pro-capitalist political parties only offer.

Inside Israel, the minority Palestinian population suffers the highest levels of poverty but it's also the case that around 20% of Israeli Jewish children are in poverty and a large layer of Israeli Jews face endemic low pay, insecure work and a massive shortage of affordable housing.

It is a class society like others across the globe with one of the worst gaps between rich and poor - a small number of 'tycoon' families at the top control the economy.

Israeli workers are regularly forced into struggle. Last December for instance, workers at Teva pharmaceuticals occupied a Jerusalem factory and demonstrated against 1,750 job losses, and were supported by a half-day general strike.

This national conflict is in an impasse with no meaningful negotiations taking place. The pro-capitalist political parties on both sides of the divide offer no way forward.

New, independent organisations of working people need to be built on both sides, democratically run and controlled and able to attract support by acting in the interests of ordinary people.

This can be done by adopting socialist programmes - as only a socialist solution can end the insecurity, wars, inequality, dispossession, discrimination and poor living standards that are all rife under capitalism in the Middle East today.

The Socialist Party in England and Wales has a sister organisation in Israel-Palestine called Socialist Struggle Movement (SSM - https://socialism.org.il ).

SSM is active in supporting the struggles of Palestinian and Israeli Jewish workers. Its members also actively protest against the occupation and the blockade of Gaza, support the right of return of the refugees, and call for two socialist states - Palestine and Israel - with full democratic rights for all, including the minorities within them.