In his article in the Socialist - 'A new world order - global reconstruction after World War Two' (socialistparty.org.uk) - Robin Clapp concludes that, following the Covid-19 crisis, "a repeat of the post-1945 boom is ruled out". In the sixth article in our series - 'war, global crises and working-class struggle' - Socialist Party national committee member Alistair Tice asks: does the picture following the World War One give more pointers to what we can expect today in terms of new economic crises and workers' struggles? 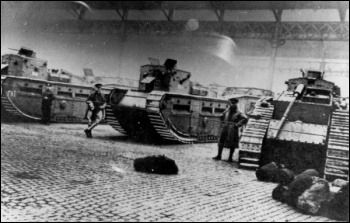 Despite defeating Germany militarily, and suffering the least damage to its civilian economy of all the belligerent European nations, British capitalism emerged from World War One in a much weaker economic position, especially relative to US imperialism.

The war's disruption of world trade led to British capitalism losing significant export markets; and the huge cost of the war effort was funded by printing money, causing inflation and substantial borrowing from the US. This, in turn, increased the national debt, and increased Britain's reliance on American capital.

The ruling class was fearful that the example of the 1917 Russian revolutions, and the mutinies and uprisings that ended Germany's war would spread to Britain, especially with millions of soldiers to demobilise.

They feared with good reason: the immediate pre-war years 1911-13 were known as the 'Great Unrest' when miners, railworkers, dockers, transport workers, and even schoolchildren, took strike action. This strike wave was cut across by the war. But even then there were the successful 1915 rent strikes on Clydeside, big strikes in 1917 of engineers, as well as several mutinies and demonstrations by soldiers demanding demobilisation at the end of the war.

With nearly one million men killed and twice as many injured or disabled, Lloyd George, the Liberal Coalition Prime Minister, promised a "Land fit for heroes" in his landslide December 1918 'Khaki election' campaign.

There was a short-lived post-war boom due to the restoration of foreign trade, the rebuilding of the half destroyed merchant fleet, and the pent-up investment and consumer demand which created inflation and speculation.

A Ministry of Reconstruction had been set up in 1917, and many of the wartime state controls and regulations were continued for a period, such as of the mines and railways, wage councils and trade boards. The statutory working week was cut in 1919, and unemployment insurance and benefits extended in 1920.

But none of this was enough to stop 1919 being a year of mass strikes and civil disorder. Faced with the threat of unemployment and rising prices, workers went on the offensive for shorter hours and higher pay.

In total, 2.4 million workers took 35 million days of strike action. The Triple Alliance (of miners, rail and transport unions) was revived, although not enacted. Miners won concessions on pay and hours, but their demand for nationalisation was stalled by the government's Sankey Commission.

Soldiers and tanks were out in the streets of Glasgow against striking engineering workers, and warships moored in the River Mersey, when even the police went on strike.

Lloyd George, was later to say: "This country was nearer Bolshevism than at any time since". But unfortunately, the trade union leaders, both moderate and more left-wing, were not Bolsheviks (ie revolutionary socialists), and so betrayed or baulked at the prospect of overthrowing the government.

Consequently, capitalism survived. Then the bosses and government went on the offensive to make the working class pay for their economic crisis.

And a profound crisis did come in 1920-21, caused and exacerbated by several interacting factors, producing the biggest fall in economic output in any 12-month period in the 20th century - a 13% drop in Gross Domestic Product (GDP - total economic output)!

A global downturn began in Japan and then the US in April 1920. This was because the war had destroyed, disrupted and contracted the European economies, which consequently shrank US exports. Spanish flu had also hit production and trade.

Britain as an export dependent nation was severely affected. Britain's old staple industries had become uncompetitive in a shrinking world market. And oil, which Britain had to import from the US, was replacing coal in industry and defence sectors. Overall, British exports fell by half, compared with the pre-war situation, and coal exports were only a third of 1913 levels.

The British government left the 'Gold Standard' (where the value of the pound was fixed against gold) at the start of the war, but still tried to hold sterling's exchange rate against the dollar, ironically with the assistance of US loans. But these loans ended in April 1918, and the value of sterling fell.

The December 1919 Cunliffe Report recommended an early return to the Gold Standard at the pre-war £1 to $4.86 exchange rate.

The ruling class saw a strong pound as a symbol of strength and prestige for British imperialism, and as a means of exercising monetary and fiscal discipline ie austerity.

To maintain an overvalued pound required high interest rates to attract investors into sterling, and deflationary policies of huge government spending cuts to reduce the national debt, and wage cuts to cut consumption and imports.

To try to reduce the huge national debt, government spending was slashed following the Geddes Committee report on National Expenditure - the 'Geddes Axe'. Social spending on education, health, housing, pensions and unemployment was slashed by 25% during 1921-24. But despite running a budget surplus of 7% a year during the 1920s, the national debt hardly reduced due to the high interest rates maintained to inflate the value of the pound.

With revolution averted in 1919, and the severe slump creating three million unemployed, the employers, backed by the government, went on the offensive against the working class.

In 1921, the mines were returned to the private coalowners, who immediately proposed massive wage cuts. Miners were then locked out for refusing to accept them and invoked the Triple Alliance for rail and transport union solidarity action.

The government declared a state of emergency and sent troops to the coalfields. Faced with a government prepared for civil war, the union leaders capitulated on what become known as 'Black Friday', leaving the miners to strike on their own for three months before being starved back to work with huge wage cuts.

By the end of the year, employers throughout industry had imposed wage cuts averaging six shillings a week (approximately £9 today) on six million workers, and trade union membership fell by three million due to mass unemployment.

Faced with a revitalised German coal industry, and the restoration of the Gold Standard in 1925 making exports more expensive, the coal owners proposed more cuts in wages and conditions. The Triple Alliance threatened a general strike.

An unprepared Conservative government bought time by conceding a nine-month coal subsidy while the Samuel Commission into the industry reported.

This retreat was heralded as 'Red Friday' by the unions, but the government used the time to prepare to defeat a general strike, which followed in May 1926 ('When workers tasted power' - socialistparty.org.uk) after the subsidy ran out and wage cuts and longer hours were imposed on the miners.

The gold standard and the general strike (followed by a nine-month miners' strike) caused another fall in output in 1926. This was followed by another weak recovery up to the Wall Street Crash in 1929, leading to the 1930s Depression.

Overall, the 1920s were a decade of relative decline for British capitalism. But it wasn't a constant decline - the decade was characterised by huge economic shocks like the 1920-21 slump and the restoration of the Gold Standard in 1925, followed by weak economic recoveries.

There were rapid shifts from inflation to deflation, from low unemployment to mass unemployment, and from capitalist concessions to austerity and repression.

These sharp turns and sudden changes caused waves of industrial militancy and political radicalisation. The war and Russian revolution led to the Labour Party adopting its socialist 'Clause 4' in 1918, and to the formation of the Communist Party in 1920.

After the 1919 strikes and Black Friday defeat in 1921, workers turned back to the political plane - with Labour gaining 91 seats in the 1922 election and a further 64 in 1923, enabling it to form a short-lived minority government in 1924.

Blocked in parliament, workers turned again to the industrial front leading to Red Friday in 1925 and the 1926 general strike, the defeat of which was followed three years later by the election of the second Labour government in 1929.

Notwithstanding the limitations of a direct comparison with 1920s Britain, a period of economic shocks, workers' struggles, political radicalisation and even revolutionary opportunities are likely to be the music of our future following today's pandemic-induced capitalist crisis.