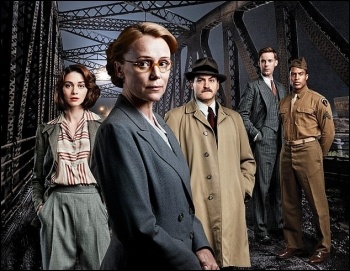 'Traitors' on Channel Four is a first-class post-war drama. The period detail is impeccable and the story is presented in a fine dramatic way.

At the end of World War Two, US imperialism calculated that the British Empire was a spent force and the US could take on the mantle of world power. In the Middle East, it pushed the project of establishing the state of Israel.

The show records a story of Americans importing nylons for sale in Britain, using the funds to buy guns for Zionist extremists.

The US Central Intelligence Agency (CIA) is equally hostile to Britain's reformist Labour government and the Stalinist "red menace" - it does not differentiate.

It is a work of fiction, although there is a high probability that the US State Department spied on Britain in this period.

CIA infiltration of trade unions, for example, is well-documented. John Pilger has investigated CIA spying on Australia and its role in helping to bring down an elected Labour government.

And if that was happening then, the viewer is left asking what the CIA is up to now? No good I suspect!

The ruthless Priscilla Garrick shows yet another facet of actor Keeley Hawes's ability. Garrick is prepared to have the protagonist, new spy Feef Simmons (Emma Appleton), killed over a suspicion she is working for US intelligence. This is all done with a finely balanced veneer of civilised behaviour.

US agent Rowe (Michael Stuhlbarg) is determined to persuade his government of the importance of the CIA's role.

He intends to fight socialism by any means necessary, and if that involves murder and blackmail, well, it's all in a day's work.

Chauffeur Jackson Cole (Brandon P Bell) is the only black cast member. A world war for 'democracy' has left the position of his family back in the States no better. His story is an interesting subplot.

I think it is a series which leaves viewers wanting more.