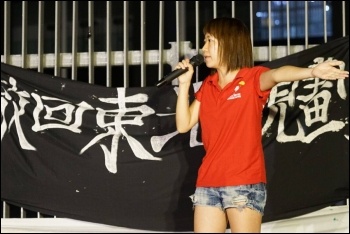 During her three-day visit to China, Britain's prime minister Theresa May avoided irking her hosts with talk of human rights or the recent attacks on democratic rights in Hong Kong.

In so doing May was following in Donald Trump's footsteps, when he visited China last November, and Emmanuel Macron during his visit earlier this year, although the French president threw in a horse for China's leader Xi Jinping.

Rather than allowing May's diplomatic sheepishness to pass unnoticed, the Chinese state-controlled media revelled in it. Beijing's Global Times hailed her "pragmatism" and said she was right to resist "radical" pressure to engage in "mudslinging" over human rights.

In the days prior to May's visit, Beijing's local government in Hong Kong launched new attacks on the city's partial democratic rights. Three opposition candidates were banned from standing in upcoming byelections to the Hong Kong legislature. The byelections are to fill vacancies created by a purge of pro-democracy legislators last year.

One of those banned was 21-year-old Agnes Chow Ting of the youth party Demosisto. She was banned on the grounds that the party's manifesto stands for "self-determination". This means it's the party that's banned rather than one individual. Demosisto won one seat in the 2016 elections only to have its legislator Nathan Law Kwun-chung disqualified along with five others in the 'Oathgate' affair.

Demosisto's secretary general Joshua Wong Chi-fung wrote an open letter to Theresa May in the Guardian newspaper. He urged her to "use her time with 'Emperor Xi' this week to stand up for Hong Kong's rights, before it is too late."

But this evidently went unheeded. May stressed a "golden era" of British-Chinese relations, using the slogan of her predecessor David Cameron, whose government signed mega-deals for Chinese investment in nuclear power, railways and London's financial sector. After May's low-key visit, however, China expert Kerry Brown said relations were in more of a "bronze era".

The British government's loss of worldwide authority is more striking, given that technically it is one of the international guarantors of Hong Kong's partial autonomy under the Sino-British Joint Declaration of 1984.

On his visit to Hong Kong last year for the 20th anniversary of the handover, Xi bluntly stated that the Joint Declaration "no longer has any practical significance".

May's office in London denied accusations she had failed to raise Hong Kong during her talks with Xi Jinping. It said both leaders had restated their commitment to the "one country, two systems" arrangement under which Hong Kong has a degree of autonomy.

This is diplomatic waffle! Every attack on democratic rights in Hong Kong is carried out in the name of defending "one country two systems", so such glib statements from Xi are meaningless and May's team have knowingly played along.

During a succession of moves to restrict democratic rights in Hong Kong, screen-out election candidates, introduce new repressive laws and jail opposition activists, many have called on Britain to speak up.

When Benedict Rogers, a senior member of May's Tory party with an interest in Hong Kong politics, was refused entry to Hong Kong on Beijing's orders last October, this prompted only a perfunctory protest by the British government.

The abduction of five Hong Kong booksellers, including Lee, was used to spread fear in Hong Kong and step up media censorship against critics of the dictatorship.

The Chinese regime feels confident it can step up repression - already the most severe in 25 years - without encountering significant pressure from foreign governments.

May returned from China boasting of $13 billion in new business deals. Cash comes before human rights, evidently, but even these sums are not impressive by past comparisons.

Britain's attractiveness as a destination for Chinese capital took a knock after the Brexit referendum and so steadying its relationship with the Chinese dictatorship was the main aim of May's visit.

Some democracy activists in Hong Kong, China and elsewhere have yet to fully grasp the fact that right-wing politicians and governments are not on the same side, they will not and never have fought for democratic rights.

Real and effective international solidarity comes from below, from workers, youth, anti-cuts and anti-austerity campaigners, a new generation of left-wing feminists, anti-racists and migrant rights advocates.

In other words, it comes from the very sections of the population that are battling against the big business policies of Theresa May and Donald Trump. These are the layers the Stop Repression in Hong Kong campaign is turning to.

International pressure is needed to protest the repression in Hong Kong and China. But our appeals need to be addressed to the right people.