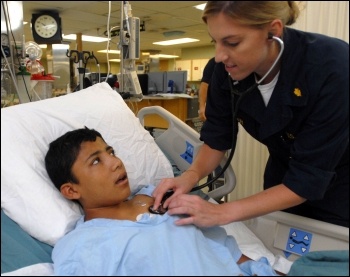 This is the practical attitude of this Tory government, which has overseen a project of vicious NHS cuts - to the point where hospitals in England are struggling to provide beds to young children in desperate need of intensive care.

Working-class people already have first-hand experience of how austerity has driven down our NHS to the level of a postcode lottery.

Now the Guardian has revealed that children in critical condition have to be rushed around different parts of England, sometimes dozens of miles away from their home, in circumstances where every minute counts. This truly represents our NHS at breaking point!

Health minsters can't even use their classic excuse of a 'harsh winter'. The end of 2019 was much milder. But staff working in paediatric intensive care units have felt a tremendous increased pressure on their day-to-day tasks due to shoestring budgets, with one specialist in London describing it as "dangerous and rotten for the families."

This all derives from the truly dangerous and rotten system that is capitalism. In its pursuit of lining the back pockets of vulture billionaires and millionaires, it doesn't just enable a situation like this. It even desires it, in order to give more false justification for the bosses' 'solution' of yet more privatisation and outsourcing.

This dangerous lack of intensive-care beds for children, compounded by bare-bones paediatric funding and the general crisis in the health service, sends out a strong message to workers of what we can expect. Our NHS and public services, run by the capitalists, undervalued and under attack.

We in the Socialist Party fight daily against every cut to the health service. We call for the immediate full funding of all NHS services, not just the insufficient and double-counted increase promised by Johnson. We also fight for all privatisation to be reversed, and for our public services to be run under democratic workers' control and management.

End the postcode lottery! From cradle to grave, all should receive the medical treatment they need.