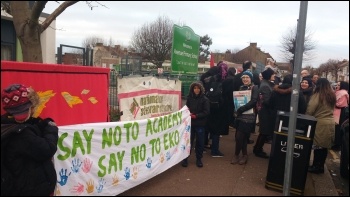 The National Education Union (NEU) conference (NUT section) will see the union at a crossroads.

We must judge the success on the conditions of our members in the classroom. I'm sure if you ask any serving teacher if their working life has seen improvement you'll get a curt response.

Teachers are leaving in droves, funding cuts are exacerbating the crisis and the testing regime is causing extreme anxiety for the children we teach. Our leadership's lack of a serious strategy and a willingness to follow it through has led us to this point - weakness invites aggression. Let's not forget that two years ago we voted for a programme of discontinuous strike action and ended up with a one-day strike.

The recent advice on workload shows the government feels under pressure to respond but we've heard this before. Unless there is legislative change and new money to back it up, workload will continue to drive people out of the profession. That kind of change will only be achieved if we're willing to fight for it.

There are opportunities on the conference agenda to instruct the executive to launch the kind of action necessary. Many will argue that national strike action is not possible now under the Trade Union Act. But the Communication Workers Union and University and College Union have already shown that it's possible to defeat these undemocratic voting thresholds, providing there is a serious, well-prepared campaign with fighting demands.

This is all connected to the need to fight for a healthy democratic culture in the new union. The Socialist Party warned at the special conference in 2016, that there were potential dangers contained within the new structures of the NEU. Some of these warnings have proved correct and members will need to stay vigilant to ensure the union serves us.

The current wave of local strikes by our members, particularly in London, shows what can be done when members organise and a lead is given.

This is a critical time for our schools and our movement. We can't just wait for a Labour government and see more people driven out of teaching. We need a bold, fighting and democratic union to take it to the Tories.