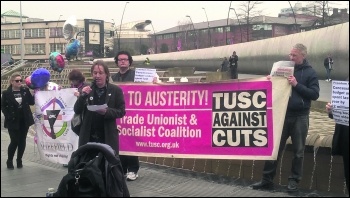 Four police officers and one police community support officer are to face misconduct hearings relating to the 'freedom ride' protest by pensioners and disabled people on 23 June 2014. One of these officers, who had given a statement saying protesters were like "a pack of rabid dogs", is to face a hearing for gross misconduct.

The Independent Police Complaints Commission (IPCC) has concluded that his statement included inflammatory language and was unsupported by footage of the events.

On the day, while we listened to speeches on a platform at Sheffield station, transport police had waded in and arrested two pensioners who were later charged with obstructing police and travelling without a ticket. One of the pensioners was pushed along the platform, as protesters tried to help him.

Another was jumped by five transport police who pressed his head downwards as they pushed him along, bent double. Protesters supported by crutches and sticks were pushed over by police, and a blind woman was pushed onto a wheelchair user. Five went to hospital.

Several protesters complained to the IPCC. Nearly three years on, the IPCC has directed British Transport Police to carry out these hearings into misconduct.

The matters to be looked at in the police officers› hearings include the protesters' allegation that unlawful force, amounting to assault, was used. They are to be held in May and June this year.