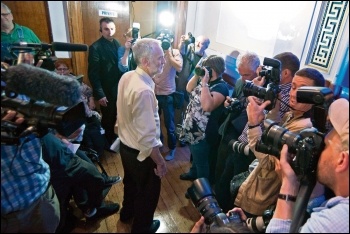 Jeremy Corbyn did not get across a clear anti-austerity message to maintain past Labour votes, photo by Paul Mattsson   (Click to enlarge)

Elections in Bolsover, Derbyshire, don't usually make national news. But on 2 May Labour lost 14 councillors and control of the council.

The district council has been Labour since it was formed in 1972 and MP Dennis Skinner used to have the biggest Labour majority in the East Midlands.

Neighbouring districts of North East Derbyshire and Ashfield also saw terrible results for Labour. This ex-mining area showed its anger at Labour and lack of a fightback after years of economic decline.

With few resources but a clear programme, Socialist Party candidates showed the potential to build a working-class alternative to Tory cuts passed on by right-wing Labour.

In Bolsover North and Shuttlewood ward, Socialist Party candidate Elaine Evans won 45% of the vote and came within a whisker of winning a seat.

Overall, there was a low turnout - down to 19% in one ward. Jeremy Corbyn has not got across a clear anti-austerity message to maintain voters' past loyalty to Labour, particularly with compromises to Blairite Remain MPs over Brexit.

The other big factor was many independent candidates standing on very local issues and promising to put 'community before politics'.

They will now be tested by the same cuts that Labour failed to fight. Differences between them will emerge.

Most of these changes don't fall within district council responsibilities - it's government and county council cuts, and changes in the capitalist economy.

But Labour district councillors argued for years that their hands were tied and there was nothing they could do but try and minimise the damage.

Bolsover district didn't make as big cuts as some councils have. They merged top management with North East Derbyshire and sold council property instead.

But they failed to mount a campaign to win extra money from the government by implementing no-cuts budgets and mobilising mass support.

They have taken the blame for being in power all these years while the decline has taken place.