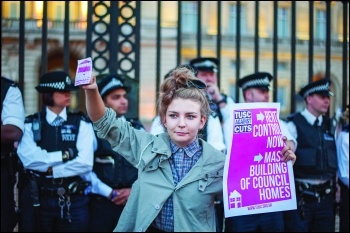 It's a tough time to be a young person in Britain. Almost two-fifths of Millennials, young people born by 2000, rent privately at 30.

That's double the rate of 'Generation X', born between 1966 and 1980. It's quadruple the rate of the 'Baby Boomer' generation, according to the Intergenerational Commission led by the Resolution Foundation. Even these older generations face rising rents and mortgage costs, and attacks on social and council homes.

In Newham, east London, the average worker spends 60% of pay on rent, according to general union GMB. That's 157 days' pay a year going to the landlord. For those on poverty pay, the figure is much higher.

Patrik Schumacher is a top architect who in 2016 called for the abolition of social housing and privatisation of all public space. In a recent report for the ultra-Thatcherite Adam Smith Institute, he states young professionals need only "hotel room-sized" flats!

Of course. Britain's housing crisis is because too many people have 'luxuries' like living rooms and kitchens!

With housing high in voters' minds in the local elections, the Tories have been touting May's pledge to start what disgraced former deputy Damian Green called a "rebirth of council house building."

But a Guardian investigation was able to show almost one in ten councillors in London - Tory and Labour - either work for property businesses or have received gifts or hospitality from them. The real figure is likely higher still.

We need anti-cuts, anti-privatisation councillors who will fight for mass council house building, rent caps, and more rights for tenants. Councillors who can't be bought by property moguls. When the government says "cut," Tory and Blairite councillors say "how much?"

In Lewisham, south London, I am standing for the Trade Unionist and Socialist Coalition (TUSC). That's the anti-austerity electoral alliance including transport union RMT and the Socialist Party.

Lewisham's cuts since 2010 total £153 million. But it has tens of millions in unallocated reserves and huge borrowing powers. Vote TUSC to cap rents and build council homes now - and fight to win the money back from the Tories!