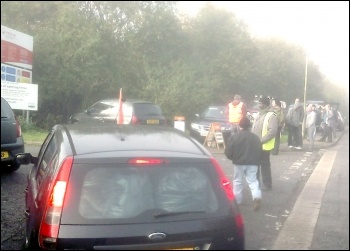 The Green Company, owned by a 'charity' Salvaire, run the sites as a sub-contractor for multinational Veolia, who run Sheffield Council's waste management service on a thirty year contract.

Serious concerns have been raised by the GMB about how the contract is being managed. Around £60,000 has been paid in expenses and consultancy fees to Martine Laffan-Butler who is chair of Green Co and Salvaire. When this was queried by the Finance Director, a GMB member, she was suspended, as was another of the senior management team and a third one has resigned, leaving Laffan-Butler in sole charge.

The workers are angry because they had a good working relationship with the outgoing senior management team, all GMB members. And while substantial amounts of money appear to be getting siphoned off, workers have been refused premium rates for weekend and overtime working and are still waiting for decent welfare facilities.

The strikes shut down two of the five centres. Sheffield Socialist Party members answered the union call for support by joining picket lines and have blocked and turned round several waste haulage wagons.

What a way to run a council service! This dispute highlights the lack of accountability of privatised services and is a major embarrassment to Sheffield's Labour council.

The Socialist Party says Green Co/Savaire should be sacked and the waste management service taken back in-house.

This version of this article was first posted on the Socialist Party website on 13 October 2014 and may vary slightly from the version subsequently printed in The Socialist.