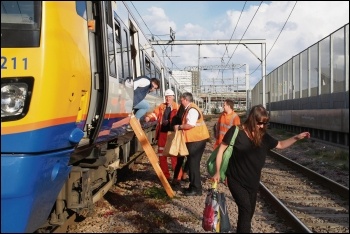 The heat caused train infrastructure to break down, photo by Tom Anderson/CC   (Click to enlarge)

Thursday 26 July was officially the hottest day on record. Temperatures reached a sweltering 38.7°C in Cambridge.

The extreme heat caused misery for those stuck in blisteringly hot workplaces as well as thousands of stranded passengers, as our poorly funded infrastructure ground to a halt.

All Greater Anglia trains between Cambridge and London were cancelled. There was overcrowding at St Pancras, Euston and Waterloo stations.

Disgracefully, homeless people struggled to access drinking water, a consequence both of capitalist austerity and gentrification.

While a single weather event cannot be directly linked to global warming, the trends of weather over time clearly point to a changing climate.

20 of the warmest ever years recorded have been since 1997. The Met Office found that the UK is 30 times more likely to experience heatwaves compared to the year 1750, due to increased greenhouse gasses.

But despite knowing that 71% of all greenhouse gasses are from just 100 companies, the Tory government continues to put the blame on working-class people. As we enter the school holidays, the Environmental Audit Committee is launching an inquiry into tourism and its contribution to climate change.

But workers wanting to enjoy a holiday with their families are not to blame. Rather, multibillion-dollar companies, which continue to put profit ahead of the needs of the planet and workers, are.

For example, Carnival operates cruise ships out of Southampton and made $3 billion in profit last year. They have repeatedly refused to take measures to clean up their practices, despite receiving hefty fines.

Their ships emit ten times more sulphur than all of Europe's 260 million cars. They are unwilling to dip into their profits to convert their cruise ships to mains electricity, and so leave their dirty fuel-guzzling engines on 24 hours a day while in port, contributing to the air pollution crisis in Southampton.

At a protest outside Carnival HQ on 27 July, one protester pointed out the hypocrisy that "outside schools we see signs telling us to turn our car engines off to protect our kids' lungs, but massive polluters like Carnival can leave theirs on all day?"

Unless steps are taken to drastically reduce global emissions and halt global warming, extreme weather events like July's heatwave will become more frequent. The answer to the problems of extreme weather, and the rising emissions causing it, is socialist change.

If the transport industry was under workers' control, the profits currently being hoarded away by bosses could be directed towards investing in a greener and more resilient transport network.

In the meantime, it is essential for workers, residents and environment campaigners to join together to fight corporate giants like Carnival whose drive for profit at any cost is destroying workers lives and our planet.