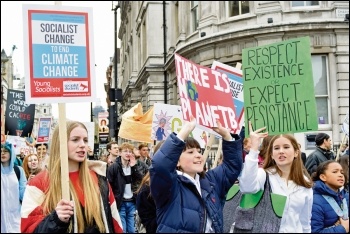 For a third time in successive months, young people, mainly school and college students, took to the streets in cities and towns across the UK on 12 April to protest against the lack of action by government and big business to halt potentially catastrophic climate change.

The walkouts and protests were noticeably smaller than those on 15 February and 15 March - partly reflecting the Easter holidays, but also the absence of a coherent programme to tackle climate change caused by capitalism, and the lack of campaigning strategy and organisation to develop the movement. Below, the Socialist carries some reports on the 12 April action.

Socialist Party members and Socialist Students have helped build for and participated in all three days of protests. We call for and are assisting students to establish democratic student unions and to link up with workers organised in trade unions - whose potential industrial muscle can achieve political change - together in a united campaign.

At the same time we fight for a programme of socialist measures - including public ownership of public transport, major industries and agribusiness, in order to globally plan production in a sustainable and environmentally friendly way.

Students marched through Brighton to protest against climate change. This time, they held a sit-down protest on the main road in town, which has been listed as Britain's seventh most polluted street outside London.

Socialist Students explained that by reaching out to the working class and trade union movement, we could shut down not just one road, but the entire country!

Many young people were keen to discuss socialist and Marxist ideas, despite reluctance from the official organisers to politicise the event. But the mood of the school students themselves was clear. There was huge support for the idea that to fight climate change, this system - capitalism - has got to go. And that starts with kicking out this rotten Tory government.

Unfortunately, the protest was much smaller than previous months, which made our calls to get organised and build the movement more important than before. This means forming groups in the schools and colleges for a democratically organised, mass movement against climate change.

The Facebook announcement for the Nottingham climate strike on 12 April said that the event would go ahead, but there would be no organisers there!

People wanted to know why no organisers were there and this was a good way to start a conversation about how a movement should be built and organised democratically and with accountability.

Nottingham Socialist Party branch secretary, Geraint, spoke about the need for socialist change to solve climate change and our ideas to take the momentum around the strikes forward.

At a meeting afterwards we organised future leafleting and a meeting to build for the next climate strike, as well as a plan to approach local trade union branches to get support from workers. This includes approaching the National Education Union.

The dissatisfaction with establishment politicians and the lack of activity from the Trade Union Congress and union leaders has led some campaigners to adopt a 'non-organisation organisation' model. This has the consequence for organisers of making them unaccountable.

They also do not have a programme to bring about meaningful change. One of the demands of #YouthStrike4Climate is to get councils to declare a 'climate emergency'. Nottingham and other cities have done this, but it does not mean anything without binding environmental policies.

They also think that youth regularly demonstrating will move big business and capitalist governments to act. It will not.

We need to organise school and student unions and organise among trade unions and workers. The movement needs to be democratically led and accountable and have a proper programme to stop climate change - pointing to an end of capitalism and the socialist transformation of the world.

The school strike had a positive and militant atmosphere which culminated with a spontaneous mass sit-down protest on a busy main road. (continued right)

The crowd had a mixed character, including some liberal elements, who unfortunately limited themselves to vague and abstract calls simply for politicians to "take action on climate change".

However it was the Socialist Party's calls for the nationalisation of the banks and top companies on the basis of democratic workers' control in order to fund alternative 'green' energy production which resonated most clearly with the protesters - with 23 protesters signing up to Socialist Students.

The third round of climate strikes took place in the middle of high school students' Easter break. With around 400 gathered on the steps of Leeds Town Hall the turnout was smaller than on the previous two strikes. However, considerable developments were made towards achieving a greater level of autonomy and unionisation for the striking students. 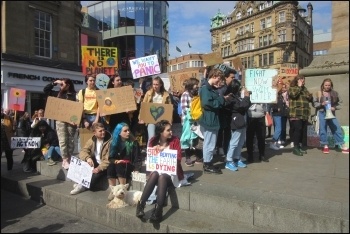 Young people were out in force for the demonstration which began at the Newcastle civic centre and marched through town until reaching the Monument in the heart of the city, where Socialist Party members ran an open mic.

Many protesters highlighted issues around pollution and environmental damage caused by big business and placed emphasis on the vital need for system change.

The young people in attendance, who were mainly teenage girls, showed a vital understanding of the critical need to dismantle the current system which places profit before people, if we are to succeed in halting climate change.

The ideas and passion of these young people will surely only lead to even better strikes in the coming weeks.

School holidays might have cut across the turnout on the third day of action against climate change. But, as usual, the demo was loud and angry. We marched up to Oxford Circus where students filled the road and sat down.

On previous demos Socialist Students held an open mic, allowing students to discuss a way forward for the movement. Learning from this initiative, the organisers on this demo turned the sit-down protest into a mass student assembly allowing any student to speak.

A member of Socialist Students spoke on the need to build school student unions which can defend students from punishment by school management. We have organised a meeting about how to launch school students unions.

Some students are starting to raise the idea of a 'Green New Deal'. One student also linked it to the need to fight for climate jobs with decent pay.

We discussed how any Green New Deal will have to include socialist demands of taking ownership and control out of the hands of polluting companies, which dominate the economy, and put them under public ownership and the control of workers and young people.

Over 150 young school students gathered in the centre of York to protest against climate change. There were speeches and music and they marched around the city centre twice.

I spoke at the beginning of the rally and my promise of safe spaces for students to meet, which had been agreed by the York Trades Union Council, was met with enthusiastic applause.

The numbers on this rally were down on the previous one, with exam pressures and school staff training days being cited as possible reasons. The age demographic was also younger and there was a clear majority of female protestors.

I spoke to a lot of protestors about building teams of like-minded students in their schools and linking up between the different schools. I left information for them to contact the local trade union council and the Socialist Party to assist them in building a campaign that includes planning and discussion groups. I am also building an increasing list of contacts who I can email directly.