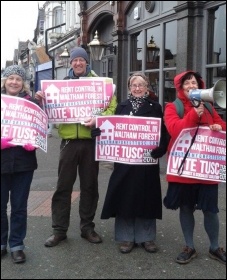 'Generation rent' is becoming more like 'three generations rent'. The website spareroom.com has recently revealed that in 2013 more than 60,000 over-40s placed 'room wanted' adverts on the site.

So while it's widely acknowledged that young people will be the first since World War Two to be worse off than our parents, this suggests our parents aren't doing too well either!

Despite all the hot air about the magic wand of the government's help-to-buy scheme, owning our own home is completely out of reach for most of us. So, renting it is. And that's not a cheap option either.

The average monthly rent is now £676 in Britain. People in 17 London boroughs now spend more than 50% of their income on rent.

A recent Channel 4 report highlighted the case of Sian Green. Sian is 20, works 12 hours a day, six days a week and rents a bedroom in a London flat infested with cockroaches. She earns £800 a month and pays £700 in rent. Sian is nowhere near unique.

With wages stagnant at best and private sector rents sky-rocketing, a record number of 20-34 year olds now live with their parents.

The message is clear - if you're poor, you have no right to an adult life. Your punishment for not being able to find a job when there aren't enough, for being low-paid when wages are declining or frozen, is to face overcrowding, poor conditions or even homelessness.

People are desperate. And landlords and letting agents know it. It's becoming increasingly common to ask potential tenants to 'bid' against each other and give the house to the person or family prepared to pay the most. What chance do we stand if we earn below average?

Never mind if we're unemployed or so low paid we have to claim housing benefit.

We're supposed to believe that there's no alternative to this madness. But then why has the problem got so much worse? Deregulation, privatisation and cuts. 25% of council housing, which used to be a safe and affordable option for working class people, has been sold off.

Nowhere near enough housing is being built. They've changed the definition of 'affordable' so that very few can actually afford it.

Enough is enough! We have to fight to end this housing misery and make sure everyone can afford a decent place to live.