Unity in struggle against Temer's attacks 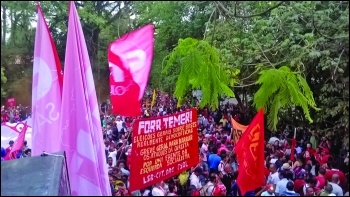 On 24 January 2018 the conviction of ex-president Luiz Inácio Lula da Silva ('Lula'), linked to the 'Lava Jato' (car wash) corruption case, was upheld by a federal tribunal, thereby barring him from the upcoming presidential election.

Lava Jato centres on the state oil company Petrobas and alleged corruption by Lula and his Workers' Party (PT) and politicians of the Brazilian Democratic Movement Party (PMDB), the party of current right-wing president Michael Temer.

The objective of this second conviction of Lula - frontrunner in all opinion polls - is to eliminate him from the 2018 presidential elections.

The political nature of this case is even clearer when considering that Temer, despite reportedly trying to bribe a politician imprisoned over the car wash scandal, is not facing any investigation.

While maintaining our political differences and criticisms of Lula's policies, we also unwaveringly explain that the actions of the capitalist justice system in Lula's case opens up a dangerous precedent for the left, social movements and the democratic rights of Brazilian people.

It is part of a wave of attacks which only benefits a handful of capitalists and their political servants.

On top of the neoliberal counter-reforms implemented by the government, attacks on democratic rights are multiplying, especially on the poorest.

The imprisonment of Rafael Braga has become a symbol of this situation. 27 year-old Rafael is the only person convicted in connection with the mass protests against transport fares hikes in 2013 which preceded the staging of the football world cup in Brazil.

Another dramatic example was the criminalisation of 18 youths from Sao Paolo - victims of an agent provocateur - who were persecuted for protesting against Temer.

New repressive legislation which comes from the previous government of Workers' Party president Dilma Rousseff, such as the anti-terrorist law, is now being used against protesters.

Lula is not a conscious factor in the radicalisation of the struggle or even a consistent opponent of the current political and economic order.

Lula's presidency was characterised by class conciliation (whereby supposedly everyone would win, billionaires and the poor) and conciliation between political forces.

This did not change following the parliamentary coup (impeachment) which removed Lula's successor, Dilma Rousseff, from the presidency in August 2016.

PMDB politicians were recorded plotting to force Rousseff out in order to head off corruption investigations they themselves were implicated in.

With the impeachment manoeuvre in 2016 the ruling class wanted to rearrange the political landscape in order to be able to make a qualitative step forward in their attacks on the working class in the context of the Brazilian and international capitalist crisis.

The big capitalists wanted more than the PT government could give. They wanted to impose a drastic defeat on the working class.

The corrupt, unpopular, coup plotters' government of Temer served this purpose, guaranteeing counter-reforms on workers' rights, the freezing of public spending, privatisations and handover of public wealth to foreign capital.

For them, it is fundamental that in the 2018 elections there is no risk or threat to the continuity of these attacks from any future government.

Despite the conciliatory tone from Lula, he cannot (even if he wanted to) defend a deepening of these policies.

This is why, as favourite for the elections, he has to be removed from the equation from the capitalists' perspective.

LSR never supported the governments of Lula or the PT. As part of the broader PSOL (Party of Socialism and Liberty) and of the struggle for the rebuilding of a mass socialist left in Brazil, we were a left opposition to the PT governments and were on the side of the struggles of workers for rights and demands denied by these governments.

In the electoral process this year, we support the unanimously adopted position of PSOL, to have its own presidential candidate and therefore not to support Lula or the PT.

We understand that the Lula model of class collaboration does not serve the interests of the working class and majority.

These policies disarmed the working class, demobilised the social movements and created the conditions for the coup of 2016 and the defeats we have suffered.

With the catastrophe of the Temer government, illusions in a supposed return to the 'good times' of Lula represent a serious obstacle to the struggle of workers.

Therefore, our alternative is a united front of the socialist left and social movements in an anti-capitalist, socialist alternative for Brazil.

This would be at the service of the struggles of the working class, but would also need an independent electoral expression this year.

In the struggle to build this front, its forces must fight against all attacks, including attacks on democratic rights.

Denouncing Lula's removal, without defending the positions of Lula or the PT, is part of this struggle.

During the resistance to the attacks of the Temer government, LSR has defended the maximum unity in action.

The struggles at the beginning of 2017, especially the general strike on 28 April, were a show of strength by the working class and a demonstration of the potential for struggle that exists when there is unity between different movements and sectors.

A democratic movement must be organised from below, which deepens the level of mobilisation beyond what we saw in 2017.

A movement which defeats the pensions attacks, cancels the counter-reforms imposed by the corrupt parliament, and at the same time fights for guaranteed rights for all.