Labour councils don't have to pass on Tory cuts

Up until Jeremy Corbyn was elected as an anti-austerity Labour leader, Labour councils loyally implemented Tory cuts. Since 2010 local government spending has shrunk by 40%. Countless essential services have already been cut to the bone.

Now the Tory chancellor, George Osborne, has announced a new round of savagery in 2016 with a massive 8.8% (£2.6 billion) cut in the central government grant to local councils. He hopes to disguise the Tories' axing of public services by again relying on the little axe men and women at council level to shoulder the burden of inflicting misery.

The central reason that Corbyn was elected by a landslide was his clear anti-austerity stance. This included calling on Labour councils to stand together and refuse to implement cuts.

Unfortunately, it seems that Jeremy Corbyn and John McDonnell have now retreated from this in a joint letter (along with Shadow Local Government and Communities Secretary Jon Trickett) to Labour council leaders [see transcript below].

If this letter is a signal to Labour-led councils not to fight the Tories' cuts, as it appears to be, it will be a blow to all of those who hoped that Jeremy Corbyn's election was a step towards transforming Labour into an anti-austerity party.

Already right-wing Labour councillors up and down the country are trumpeting Jeremy Corbyn's 'support' for their cuts policies. For them the letter is a 'licence to cut' jobs and services on a massive scale. Of course, their pleasure at Jeremy Corbyn's apparent retreat from a clear anti-austerity policy will not result in gratitude if the electorate punishes them in the May 2016 elections. On the contrary, they - along with the Blairites in the parliamentary Labour Party - would use it as an excuse to, as arch Blairite MP Jess Philips put it, "knife him in the front". 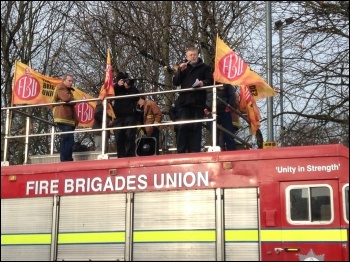 Coventry Socialist Party member and chair of TUSC Dave Nellist speaking to a demonstration against fire service cuts in the West Midlands, December 2015   (Click to enlarge)

The letter correctly points out that: "The government's austerity cuts are a political choice not an economic necessity", but does not recognise that this applies to Labour councils as well as the national government. On the contrary, the essence of the letter seems to be that Labour councils have no choice but to wield the Tory axe and to attempt to pin the blame on the government.

The reasons given for this do not hold water. The letter states: "As you know, councils must set a balanced budget under the Local Government Act 1992. If this does not happen, i.e. if a council fails to set a legal budget, then the council's Section 151 Officer is required to issue the council with a notice under Section 114 of the 1988 Local Government Act. Councillors are then required to take all the necessary actions in order to bring the budget back into balance."

But in reality, if Labour councils stood together they could all set legal budgets next year without implementing a single cut! The letter rightly praises "innovative" measures by local councils but appears not to consider innovative measures that would prevent all cuts.

Yet even if the 58 Labour-led councils with elections next May were to pool the £4.5 billon they hold in useable general reserves they would be able to make use of prudential borrowing powers to set legal no-cuts budgets.

The same Labour-led councils have sufficient capital reserves, for example, to legally undertake prudential borrowing to build 100,000 council homes in the next financial year. This would be a very concrete form of the People's QE and a real signal that Labour is in fact, and not just words, an anti-austerity party.

Of course it is true that councils would not be able to set legal budgets indefinitely by using reserves and prudential borrowing powers. However, doing so would be a vital first step in a campaign of mass defiance to demand the funding needed from central government.

Such a campaign would be enormously popular and would have the potential to defeat the Tories; a profoundly unpopular government elected by just 24.4% of the electorate. 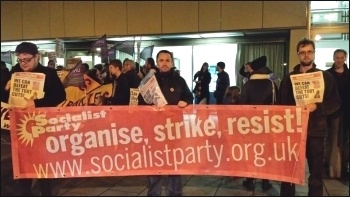 Socialist Party members on a protest against library cuts in Lambeth, December 2015   (Click to enlarge)

John McDonnell is correct to support trade unions defying the undemocratic anti-trade union laws, he should be prepared to call on Labour councils to also defy unjust laws.

In reality the legal powers that the Tories could use against Labour councils that set illegal budgets are weaker now than they were in the 1980s. The worst that could happen is that individual councillors could be removed from office for up to five years. But this would trigger byelections - in which new anti-austerity Labour council candidates could be elected.

Back in the 1980s there were initially 20 Labour councils that stood up against Tory cuts. Unfortunately, 18 of them retreated, leaving Liverpool and Lambeth standing alone. Liverpool was able to force the Tories back because it mobilised a mass movement - including regional general strikes - in support of its policies.

Liverpool City Council, in which Militant (now the Socialist Party) played a leading role, was able to win the equivalent of £98 million today from Thatcher's government.

At that stage John McDonnell, then working for Ken Livingstone's Greater London Council (GLC), correctly opposed the GLC joining the retreat. Today, tragically, he has put his name to a letter that appears to sound the retreat before the battle has begun.

Passing on the Tories' cuts to local public services when resistance is possible would belie the claim in the letter that Labour is now "an anti-austerity party". Unfortunately this is not yet true.

As arch-Blairite Peter Mandelson has rightly declared, Labour is "turning into two parties". The pro-big business, pro-austerity party of Mandelson, and a potential anti-austerity party around Jeremy Corbyn and John McDonnell.

As we have repeatedly argued it is only by inspiring, organising and mobilising the anti-austerity forces that thrust Jeremy Corbyn into power that it will be possible to defeat the attempts of the Blairites to undermine, discredit and force out the new left leaders of the Labour Party. However, by making concessions to the right - and providing a letter to act as a fig-leaf for Labour councils carrying out cuts is a very serious concession to them - there is a real danger of demoralising and demobilising the anti-austerity movement in formation.

Jeremy Corbyn and John McDonnell should clearly oppose all cuts to public services locally and nationally.


Transcript of the letter sent out by Jeremy Corbyn, Jon Trickett and John McDonnell:

To leaders of council Labour groups

We are writing to you as leader of the party, shadow secretary of state for communities and local government and shadow chancellor. Today the government has announced the local government settlement. In spite of their smoke screens it is quite clear that once again a huge cut in local government spending is being imposed by the Tories.

We wish to put on record the thanks of the leadership of the Labour Party for the job which you and your councillors are doing, standing up for your communities, doing your level best to put our principles into practice in very difficult circumstances, and being the frontline representatives of our party. We ourselves experienced such a task as local councillors during the Conservative government of the 1980s.

Indeed all the Shadow Communities and Local Government team members have been or indeed are elected councillors. We celebrate the fact that Labour councils up and down the land are still finding innovative ways of making social and economic progress even in the face of a government hell-bent on cutting local government to the bone.

A number of colleagues have requested clarity about Labour Party policy concerning the setting of legal budgets.

The Shadow Chancellor, John McDonnell MP, said in September "...the situation councils are now in is if they don't set a budget, a council officer will do it for them. There is no choice for them anymore." As you know, councils must set a balanced budget under the Local Government Act 1992. If this does not happen, i.e. if a if a council fails to set a legal budget, then the council's Section 151 Officer is required to issue the council with a notice under Section 114 of the 1988 Local Government Act. Councillors are then required to take all the necessary actions in order to bring the budget back into balance.

Failing to do so can lead to complaints against councillors under the Code of Conduct, judicial review of the council and, most significantly, government intervention by the Secretary of State. It would mean either council officers or, worse still, Tory ministers deciding council spending priorities. Their priorities would certainly not meet the needs of the communities which elected us.

Following the debate inside the Party during Labour the leadership election and at our annual conference our Party is now clearly an anti-austerity party.

The government's austerity cuts are a political choice not an economic necessity. It is critically important therefore in the run up to the local government and mayoral elections in May 2016 that we pin the blame for the cuts in local government services squarely on the government, which is causing them.

That is why we aim to build a national campaign and to work alongside Labour councils to mobilise local campaigns in their areas to expose the devastating impact of this government's cuts to local council spending. We wish to work with Labour Councils in forging strong alliances with local community campaigners, council staff who are under duress as a result of Tory spending cuts, local citizens and others in defending local services.

No doubt you will already be considering with your Labour Group exactly how best to expose the Conservative government's destructive fiscal strategy. If you require further information and advice on budget setting and campaigning, please contact the LGA Labour Group on 0207 664 3263.

There is one request we would like to make to you. If there are any cuts or decisions which are imposed upon your council by the Tories which deserve to be highlighted nationally, please let Jon know so that we can hold the government to account. Another area which we would like to hear about is any short term cuts which are being imposed upon you which then cause longer term rises in public expenditure, for example cutting adult social care can lead to increased NHS spending.

We would ask you to keep us informed of the overall impact of the cuts imposed by the Conservative government in your area, including the knock on impact on the NHS and to identify critical areas of urgent need so that we can keep raising these issues in and out of Parliament.

We look forward to hearing from you and working with you in the months to come, in the meantime please accept our best wishes for the Festive Season and please convey our best wishes and season's greetings to all your Labour colleagues.