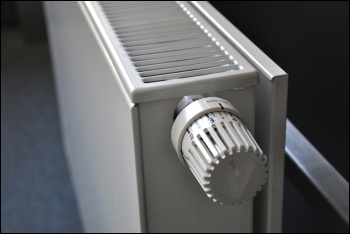 We freeze while parliament gets an upgrade   (Click to enlarge)

"The heating, ventilation, water, drainage and electrical systems are now extremely antiquated and improvements to fire safety are needed."

This is part of the justification for a major, high-profile government spending programme.

Tackling the housing crisis? No - doing up parliament.

As the work started, MPs marked the occasion by bowing their heads and issuing statements to the press. As costs spiral, it is deemed necessary expenditure for the public good.

But outside the Palace of Westminster, energy efficiency measures for the hardest-up are being undermined by austerity. National Energy Action reports daily accounts of condemned gas appliances not being replaced because of poverty and lack of support.

Government action is limited to say the least.

The scheme set up to replace boilers is not funded by May's Paradise Paper pals, or by the taxes the Tories actually do manage to collect - or even out of the record profits of the energy providers. It is funded from energy bills - by you and me.

But instead of threatening profits, the government has cut funding to the boiler replacement scheme. This has resulted in the number of boilers replaced falling from 85,000 in 2013 to just 7,000 between April and June this year.

May has promised further action: energy price caps. These are due to start in February for a million households, with further measures expected in 2019.

But the temperatures are freezing now! We cannot wait another winter, seeing millions choose between food and fuel, with needless deaths and illness - while energy companies continue to rake in billions.

Already planned is a merger between two of the 'Big Six' energy companies - which would result in an even greater monopoly, supplying over half of households. But even breaking the suppliers up will not rid us of the profit motive.

The market has failed and will go on failing to provide the basics of food, heat and shelter to millions. Nationalising the utilities and big corporations, linked to a socialist plan of production, is the only way to guarantee the basics of living.