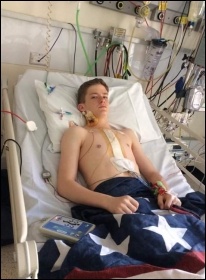 NHS England has announced that three hospital trusts in Leicester, Manchester and London will have to stop complex surgery on people born with heart problems. Five other trusts will have to stop providing other heart services and procedures.

Four years ago the NHS nationally tried to 'centralise' services and were defeated by campaigns and legal challenges. The medical arguments they put forward are flawed and it is the billions of pounds of 'efficiency savings' (read cuts) required of the NHS by this government that are really behind it.

Leicester Glenfield heart unit is one of the best and has pioneered certain treatments in this country.

The care and support they gave my son was fantastic and makes you proud of the achievements of the NHS. Kids need their friends and family around them when they have long stays in hospital, centralisation would mean greater distances to travel for family as well as for appointments for the child.

Leicester had the first Ecmo (Extra Corporeal Membrane Oxygenation) machine in the country - allowing patients, especially children and babies, to survive heart or lung failure. It now has 50% of the country's paediatric capacity.

The children's heart service is much loved, with charity fundraising providing many of the facilities including Ecmo. A battle now has to be launched. The trade unions should play a key role alongside NHS staff, patients and families.

Leicestershire Against the Cuts is holding an emergency planning meeting on 13 July to discuss the campaign. We want to save the unit in Leicester, but we also want to avoid the attempt made last time by the NHS nationally to play one hospital off against another.