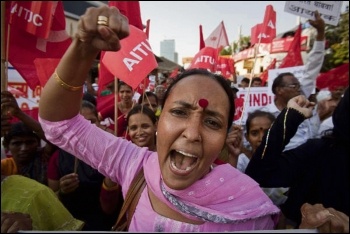 The last five years of Prime Minister Narendra Modi's abhorrently casteist, brutally capitalist and cut-throat communal regime have rammed home clearly how not to govern a country of 1.34 billion people. Nevertheless, the rich and powerful, and even much of the middle class, are rooting for Modi's return to power.

The parliamentary general election in India involves 900 million voters - by far the largest electorate in the world. Voting started on 11 April and takes place in seven stages. All the votes to elect 543 members of the Lok Sabha, the lower house of the parliament, will be counted on 23 May.

More than 50 parties are contesting these elections. Most of them are small with only regional or state appeal. The main parties are the ruling Bharatiya Janata party (BJP) and the Indian National Congress.

There are four main national pre-poll alliances - the National Democratic Alliance (NDA) headed by the BJP, the United Progressive Alliance headed by the Congress, the Grand Alliance of regional parties, and the Left Front of 'Communist'-leaning parties called Mahagatbandhan.

Though the BJP is currently less popular than in 2014, given the fractious nature of the opposition parties, there is the possibility of Modi and his party, the BJP, returning to power. Under his rule, the lives of the people have been blighted by communalism, sectarianism and the poison of religious majoritarianism, which goes in the name of "nationalism".

The choice of contestants from the various political parties, but particularly the two principal ones - the BJP and Congress Party - shows that the reference to 'secularism' in the preamble of India's republican constitution is merely a word, with no importance attached to it. All the establishment political parties violate the constitution in letter and spirit with equal impunity.

A distinction, however, must be drawn between the brazenly right-wing BJP and the Congress Party. Congress is traditionally known as the party of liberal social democracy - the legacy inherited from its long history in the pre-independence era, of fighting British colonialism.

On the other hand, Congress has been in terminal decline since the early 1980s. It has been unsuccessful in doing the balancing act of appeasing its social democratic base while keeping intact its ties with traditional big business.

This dilemma of Congress has cost it dearly over the decades. India's big business leaders have found a 'fast-track friend' in the BJP and other regional capitalist parties.

The oppressed poor and the landless masses, which were once considered a formidable support base for the Congress, have waited for nearly six decades for a better future.

Now, increasingly, they are losing their faith in this party. The hollow sloganeering of Congress, which once carried the tag of the party of the independence struggle, stands exposed.

The voices of peasants and workers, of Dalits and Adivasis (members of oppressed castes), are muffled. Most political parties ignore them.

It is evident that the real beneficiaries of government policy since 1991 have not even been the middle class, but the richest 10% of Indians who own 75% of the country's wealth. Centre stage has been the interests of prominent business houses.

This year's election is being held and fought not on real issues faced by the people. The opposition to Modi's regime is left with no choice but to deal with the issues that the Sangh Parivar (a coalition of Hindu nationalist organisations) dictates.

Since winning the election in 2014, Modi and the BJP have spread communal poison, including mob lynching, using a very well-orchestrated network of organisations linked to the Hindu extremist Rashtriya Swayamsevak Sangh (RSS).

While attention was diverted to divisive social issues, Modi succeeded in fine-tuning the Indian economy in the interests of the capitalist class, with unprecedented blatant cronyism creeping in.

In the first few months of his assent to power, Modi dismantled the decades-long policy of five-year plans. They had not been perfect, but had leaned in the direction of public ownership and developing the state sector. The BJP regime replaced them with technocrat-driven policy-making which favoured the big corporations.

All the promises Modi made during 2014 are an embarrassment to him now. Unemployment is the highest for four and half decades - around 6.1% in 2018.

The promise of 20 million jobs being created a year has become a subject of ridicule among the urban youth. India's working-age population is currently growing by 1.3 million each month, exacerbating a stagnant jobs market.

India's economy has been expanding by more than 7% annually - the fastest pace among major economies. But uneven growth has meant there are not enough jobs created for those millions of young Indians entering the workforce each year.

In January this year, the Centre for Monitoring the Indian Economy, an independent think-tank, said the country lost as many as 11 million jobs in 2018. This was the year following the infamous economic bungling of Modi's 'demonetisation' - in which 500 rupee and 1,000 rupee notes were taken out of circulation.

Agrarian distress is at its peak. This too can cost Modi dearly in the ongoing elections.

Not surprisingly, his government has attempted very late in the day to win over 120 million small farmers who hold less than two hectares of land by giving them 6,000 rupees (£66) per annum as income support. But this is a drop in the ocean of distress in which the impoverished peasants are sinking.

Neither this so-called reform measure of Modi's nor the proposal of Rahul Gandhi for a Universal Basic Income of 72,000 rupees a year (roughly £800) will help farmers deal with the massive indebtedness that often drives them to take their own lives.

While the number of millionaires increases steadily, rural India, which constitutes 66% of the total population, still languishes in poverty. The highest paid member of three quarters of rural households earns less than 5,000 rupees (around £55) per month.

One of Modi's favourite lies was that his 'Make in India' initiative would attract investments from all over the world, as the multinational corporations would be eager to take advantage of India's youthful population.

But Foreign Direct Investment as a percentage of GDP has remained limited to around 2%, and only a tiny proportion of this has gone to the manufacturing sector. This, combined with the invasion of manufactured goods from China, means India's manufacturing sector has had negative growth.

Wealth has continued to be concentrated at the top of Indian society. It is no exaggeration to say that Modi's government of the last five years is the most regressive that India has experienced since independence from the British Raj.

Nonetheless, it is true that Modi, through his divisive agenda camouflaged as 'development', has held even some sections of workers and other oppressed people under an illusionary spell.

Politics is concentrated economics, but the right-wing demagogue Modi practices 'politics by other means'. He uses the language of communalism and even engages in warmongering.

This 2019 election has become a stage for him to make claims about the threat of war with Pakistan (even going close to instigating one). He uses majoritarian religious nationalism with the aim of creating a 'them and us' atmosphere.

This election has seen the lowest of lows, with Modi repeatedly asking youth voters to dedicate their first ever votes to honouring the 40 soldiers who died in the Pulwama terror attack, allegedly perpetrated by a Pakistani suicide bomber of Jaish-e Mohammed.

BJP leader, Ranjeet Bahadur Srivastava, asked voters to cast their ballot in favour of Modi if they want to destroy Muslims.

There is now a definite erosion of the popularity of Modi and the BJP because of their dismal failure on all fronts, particularly the economic one. It is very evident from the BJP election rallies that the previous confident fanfare is missing.

Modi's famous slogan of "Sab Ka Saath-Sab Ka Vikas (with everyone, for everyone's growth)" in the 2014 election, promoting his vision of all-round development, is conspicuously missing this time.

Instead, together with his coterie, he is resorting to desperate communal and war hysteria. Modi went to the extent of declaring and threatening Pakistan by saying, "they should not think India's nuclear weapons are meant for Diwali fireworks displays".

Modi and his ilk can be defeated. But what are the possibilities of such an outcome in the given scenario of a divided opposition to Modi's regime?

More importantly, under what programme and platform can such a welcome thing happen?

The platform of 'lesser evilism', on which the so-called alternative to Modi and the BJP has been cobbled together, is built on the quicksand of caste, regional and numerous parochial identities. Ironically, in contrast to it, Modi's virulent Hindu majoritarian nationalism can appear immensely attractive.

It is easy to paint Congress and other capitalist opposition forces, who are rabidly casteist, misogynist, sexist and anti-working class, simply as anti-religious or secular in comparison to the RSS-BJP, which is openly communal and has never hesitated to use fascistic methods to terrorise the people.

What is worse is the fact that the traditional left, comprised of the communist parties, who rhetorically claim to be guardians of the working class and the poor peasants, are failing in their duty to provide an independent class alternative instead of cosying up to Congress and other discredited bourgeois parties, giving certificates of secularism to them

The very crude narrative of 'BJP versus the Congress Party' or 'fascism versus secularism' is a scarecrow used to dampen the combative spirit of India's working class and peasantry who have taken on Modi's communal regime - through massive general strikes and through walking protests of peasants and the landless.

The most recent general strike was just months ago, with a record participation of 220 million workers. Both workers and peasants have also been involved in 'long marches' to parliament on specific issues.

What the BJP fears most is the eruption of anger at the deep class divisions in society. It desires a Hindu block without class divisions where it can hide its real nature - its own class interests, those of capitalism.

Though it would be the worst outcome from a socialist and class point of view, it is most likely that Modi's BJP will return to government, albeit with a reduced majority, for want of a credible alternative.

We continue to campaign on the basis of a programme of slogans and demands for the current situation in which the traditional parties continue to abdicate their historical responsibility to lead the working class to fight for an independent socialist alternative to capitalism and against the communal politics of India's ruling classes.