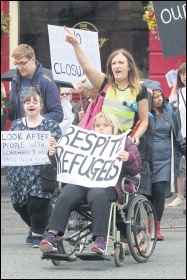 Service users, carers and workers marching against closure of the respite centre, photo by Southampton SP   (Click to enlarge)

For over a year families have fought to save the centre from closure. The centre provides vital support to families caring for loved ones with life-long special needs. Losing it would have had a devastating effect on some of the city's most vulnerable people.

When Labour councillors voted unanimously to close the centre, few people even knew it existed. As a result of the campaign by families, 'Kentish Road' is now known throughout the city.

Campaigners, led by Lisa Stead and Amanda Guest, have broadcasted their message of defiance and received overwhelming support. Using demonstrations and the local press, television and radio they have battered the city council.

City Councillor Keith Morrell and the Socialist Party has fully backed the campaign from the outset.

There have been casualties. In May, the previous Labour council leader, who took personal responsibility for the closure, lost his seat on the council. The cabinet member for adult social care has been sacked from the cabinet.

It is regrettable that despite Momentum supporters capturing the leadership of Southampton Labour Party this year and expressing sympathy for the campaign, they failed to take any meaningful action to hold Labour councillors to account. It was only the determined campaign which forced the reversal of the closure decision.

The Tory opposition jumped on the campaign bandwagon. They proposed handing the running of the centre over to a private provider or charity. But campaigners insisted that it should be funded and staffed as a council service, and that will now happen.

Initially, the centre will reopen at weekends only, with emergency respite during the week. But Lisa and Amanda have promised that "we will continue to fight" until the full range of services previously available is restored.

This is a massive win for the families and demonstrates that putting up a fight and mobilising local communities can save public services.