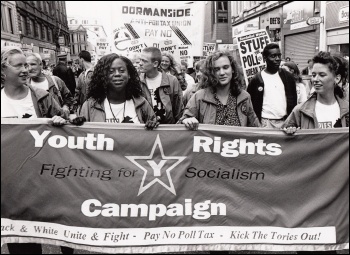 Hannah Sell (centre right) with the Youth Rights Campaign on the Glasgow demonstration against the Poll Tax 9-9-1990, photo Dave Sinclair   (Click to enlarge)

His false comments on BBC Radio 4 (interview starts at 1:37:13) accused Militant, now the Socialist Party, of reactionary positions opposite to our well-documented socialist politics.

"I am writing to demand a right to reply to the completely unfounded claims made by Ken Livingstone on the Today programme on 21 March, in relation to the Militant tendency.

John Humphrys, interviewing Ken Livingstone, made no attempt to counter his groundless attack on Militant.

Livingstone declared that Militant "was a bizarre little sect" which was "virulently bad on issues like the equality for women, tackling racism and homosexuality [rights]." This is an outrageous slur.

At 17 years old I represented the Labour Party Young Socialists on the Labour NEC alongside Livingstone. As a young woman, and a supporter of the Militant, I consistently fought against sexism, racism and homophobia - as did the Militant Tendency as a whole.

Immediately after the Labour right closed down the Labour Party Young Socialists, I became national secretary of Youth Against Racism in Europe - initiated by Militant supporters - which led a mass movement against racism and the far-right BNP.

Militant also has a record of fighting for women's and LGBT+ rights, including launching the Campaign Against Domestic Violence in 1991. I demand an opportunity to counter Livingstone's offensive statements.

In the interview Ken Livingstone made many points we would agree with on the Labour's Party's historical move to the right under Neil Kinnock, which was then completed under Tony Blair.

One essential part of that move to the right was the witch-hunt against the Militant tendency, now the Socialist Party.

This was understood by Jeremy Corbyn who consistently opposed the witch-hunt against Militant and others. Livingstone himself spoke at a mass conference Militant called in Wembley against the witch-hunt.

Today the Blairite wing of the Labour Party, again as correctly observed by Livingstone, remains determined to undermine Jeremy Corbyn and his supporters.

The only way to successfully counter this is to cease trying to compromise with the right of the party, and instead build a movement to transform the Labour Party into one of all socialists and trade unionists, including those like both the Socialist Party and Ken Livingstone who are currently excluded or expelled.

This will never be achieved by playing into the hands of the right and entirely misrepresenting the views of others on the left such as the Militant."