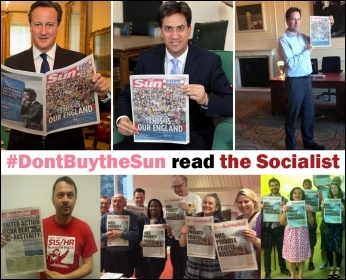 Labour Party leader Ed Miliband has had to apologise for posing with a copy of the Sun newspaper earlier this month. The spectacle of previously loyal Labour Party members beside themselves with rage must have shocked him into a u-turn.

The Sun, trying to boost its sales before the World Cup, recently invited the three leaders of the mainstream political parties, Cameron, Clegg and Miliband, to join a barely disguised advert by posing with the Sun.

Miliband defends himself by claiming he "was promoting England's bid to win the World Cup and is proud to do so." But there are other, less offensive, ways of supporting England's footballers such as wearing an England shirt. Labour though, led as usual by its spin doctors, hopes to curry favour with the kingmaker, the Sun, whose support they see as vital to winning the next election.

The Sun disgraced itself in the eyes of millions for its lying misreporting of the Hillsborough football disaster where 96 people died. Its claims that Liverpool supporters had robbed and urinated on victims have been finally and decisively disproved after years of struggle by the Hillsborough Support Group.

Merseyside postal workers started the protests by bravely refusing to deliver the free copies of the Sun. As Liverpool Socialist Party commented, when congratulating the postal workers action: "It should be an encouragement for the boycott of the Sun to be continued until not a single copy of that rag should be peddled on Merseyside."

The hatred of the Sun even made Labour's mayor of Liverpool, Joe Anderson, whom the Socialist Party has opposed for carrying out Tory cuts, say: "Like everyone in the city I am really hurt and offended by Ed Miliband's support for the Sun newspaper." Labour councillor Peter Mitchell who was present at, and survived, the Hillsborough game, threatened to leave the Labour Party.

From the moment that Miliband joined Clegg and Cameron in proclaiming his love for the Sun, he was also showing the Labour Party's adoration of capitalist politics. What serious issues divide Labour from the Tories and Liberal Democrats?

Around the country, Labour MPs and councillors have been implementing cuts imposed by the Tories. Labour, Lib Dem or Tory, the differences are paper thin. Socialist Party members have been tweeting photos of themselves carrying copies of the Socialist newspaper alongside pictures of the three-headed monster 'Cameron Clegg Miliband'.

If you want a party that takes its lead from active, campaigning workers and not from the disgusting capitalist Sun, join the Socialist Party!