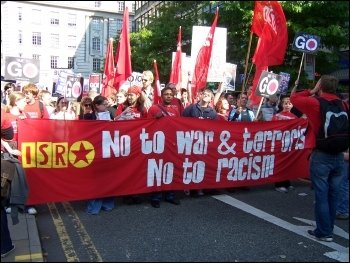 The cold-blooded slaughter of 39 tourists - mostly British - who were relaxing in a Tunisian beach resort, was carried out in the run-up to the tenth anniversary of the 7/7 terrorist bombings in London that killed 52 people.

The shocking atrocity in Tunisia came on the same day as the beheading of a company boss in France and 27 were killed in an attack on a Shia mosque in Kuwait.

These three terror acts were claimed by Isis, the Islamic State of Iraq and al-Sham, who also - on that same Friday - were reported to have killed 140 civilians in and around Kobani in north Syria.

But who laid the basis for the hornets' nest of bloody sectarian conflict in parts of the Middle East, within which Isis has carved out territory?

US administrations, with UK Labour and Tory governments willing partners, pursued a policy of 'regime change' in Afghanistan, Iraq, and Libya, and are intervening in other countries including Syria and Yemen.

Their military onslaughts have inflicted massive death and destruction and their sponsorship of sectarian forces - along with reactionary oil-rich states like Saudi Arabia and Qatar - has helped to fuel brutal territorial conflicts on the ground.

One of the outcomes has been the growth of Isis, which is now instigating terror in countries way beyond its base.

Typically it is not capitalist politicians who are being killed. Instead, as explained in the two following articles - on the Tunisia shootings and the 7/7 al-Qa'ida inspired bombings - it is ordinary people in the west and many more in the Middle East who are paying the price of the imperialist interventions.

For a renewed mass movement against poverty and terror 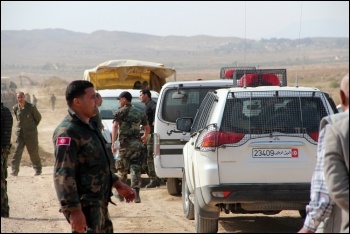 Socialist Alternative (Al-Badil al-Ishtiraki - CWI in Tunisia) strongly condemns the barbaric terrorist attack at Sousse, which at the last count has led to the death of 39 innocent people. This is the worst terrorist attack that Tunisia has ever experienced, and the second major terrorist attack targeting tourists in less than four months.

The victims, beyond the tourists massacred while on holiday and the unbearable pain caused to their relatives and friends, will also be the many Tunisians who depend in various ways on the tourist industry for their livelihoods. Thousands of tourists have already left the country or are waiting to do so.

Isis, which has claimed responsibility for the attack, might well denounce the foreign tourists as 'infidels', but in reality countless poor Muslim families are among those who will bear the brunt of its poisonous actions. Horrified at the terror attack, hotel workers and other local people - many of them Muslim - heroically formed a human barricade to protect as many tourists as they could.

The perpetrator, Seifeddine Rezgui Yacoubi, used a Kalashnikov to kill 39 people in 17 minutes. This clearly suggests that he was trained to use his weapon.

An increasing number of Tunisians are being trained or armed through the expanding terrains of war in Syria, Iraq and neighbouring Libya. The latter has become, since the Nato-led military intervention, a hub for traffic of all sorts by numerous jihadist and armed groups.

Since the major terrorist operation in the Bardo museum in March, the conditions which underlie this kind of horror have remained unchanged.

Rezgui was himself denied the right to be accommodated in the university dormitories in Kairouan and pushed to live in a neighbourhood where many Salafists operate and indoctrinate young people.

Mass unemployment, social and political marginalisation, the lack of basic facilities in many neighbourhoods, the lack of access to a decent education and public investment in means of cultural and artistic expression, all of this has created a deep sense of alienation among hundreds of thousands of Tunisian youth.

Radical preachers and Salafist networks, aided by floods of money from rich donors in the Gulf, are taking advantage of this for their divisive enterprises.

After this new carnage in Sousse, the terrorists could almost make us forget that four years ago, under the regime of Ben Ali, it was the state apparatus itself which was 'shooting to kill' in Tunisia, killing hundreds to protect the interests of the clique of thieves in power. While a few heads have been removed, the backbone and functioning of this state has fundamentally remained the same.

This can be judged for example by the number of deaths under torture in police custody in the recent months. The ruling party Nidaa Tounes is in direct political lineage with those who exploited and oppressed us for so many years.

That is why we cannot trust this state and this government to deal with the terrorist danger. All they are interested in is to step up repression and criminalise the freedoms we have won - a 'solution' which will inevitably fail, as it does not address the root causes of the problem.

Quite the contrary, the government's neoliberal policies and its collaboration with imperialist countries that are nourishing the wars in the Middle East and selling weapons to Sunni theocracies, will only make matters worse.

The best way to honour all the victims of terror: the victims of the jihadists but also the hundreds of victims of state terror who are still demanding justice, is to pursue the struggle for genuine revolutionary change and the development of a mass political voice representing working people and youth.

Without this, the Tunisian people will be caught between the fires of one handful of murdering criminals and another.

Social and trade union movements have revealed on many occasions the potential to attract thousands of young people into mass collective struggle to demand jobs and a dignified life. Many of the youth who are today falling prey to religious extremists were in the past fighting against Ben Ali's regime, for a better future.

The latter struggle is the type of mass revolutionary movement that we need to rebuild, to give hope to the young generation and take back our youth - out of the claws of terrorist and smuggling gangs.

If the left does not provide clear answers on how to change society and a channel for radical, mass political action, and instead disappoints those who put their hopes in it, sectarians will fill the vacuum.

They will exploit the despair that exists, diverting it into destructive individual actions which mainly workers and the poor, Tunisian and foreigners alike, will pay the price for.

Therefore, we call on all trade unions, the left and the revolutionary youth to not be misled by the propaganda of the ruling class and the media.

They are trying to create a climate of intimidation, ordering people to stand behind the government and asking for a "break" in social demands and movements. This is exactly the road for further misery and for the multiplication of the type of mayhem shown in Friday's atrocity.

Instead, we call on the Tunisian masses, trade unionists of the UGTT, left-wing parties and social organisations, to fill up the streets and attract the largest possible number of people out to say no to terror, to renew the struggle on the ground to demand jobs and a decent life for all, and to defend democratic rights against threats from any quarter.

No to terrorism, no to capitalism, no to imperialism - for a socialist alternative to war, poverty and terror!