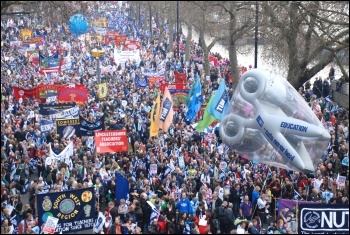 The strike of National Union of Teachers (NUT) members on 26 March is most definitely on! Now every NUT Association and every school rep must go all out to get the biggest possible turnout for the national strike.

We must reverse the damage that has been done to teachers' pay, pensions and working conditions. In doing so, we will be defending education too.

Even official DfE figures have confirmed that teachers are typically working 60 hours a week. In April, yet more will be taken from our salaries to pay for a pension that many won't be able to claim in full until they are 68 or more.

In the summer, schools can start to use Gove's performance-pay legislation to rob teachers of their annual pay progression.

We can't let things carry on like this. Strike action is essential.

The other teachers' unions NASUWT and, regrettably, now UCAC in Wales, have pulled back from action. They justify their inaction by claiming that Tory education secretary Michael Gove has agreed to 'serious negotiations'.

Regrettably, the only thing that Gove is really serious about is attacking teachers and education. 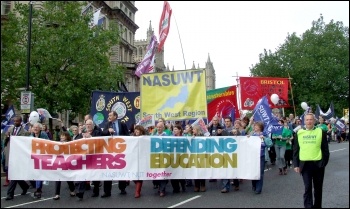 Teachers strike and march in Bristol 17 October 2013 as part of selective action by the NUT and NASUWT, photo Matt Carey   (Click to enlarge)

Michael Gove represents a government that is determined to cut costs, privatise services and encourage a precarious weakly-unionised workforce that will dutifully do the bidding of hard-nosed managers until they can take no more and resign. He isn't interested in the fact that such a regime also damages education.

The Secretary of State has always said that he is prepared to talk to teaching unions. However, he has also always made clear that any talks could only be about 'implementation' of his policies to cut our pay and pensions and to deregulate our working conditions.

Negotiations within Gove's 'implementation' parameters are unlikely to yield more than minor concessions - and, even then, it will be the threat of ongoing strike action that will be largely responsible for any gains that are made.

Shadow education secretary Tristram Hunt has already committed Labour to maintaining Gove's attacks. Teaching unions need to recognise that we will only win serious gains when we show that we are prepared to take serious action.

All of the indications are that the strike will be well-supported, just as the regional strikes were last year.

I hope that the strike will also generate momentum for further action to be called next term, so that 26 March is not left as just another isolated 'protest strike'.

There is no room for hesitation. Let's go all out to build the strongest possible national action.