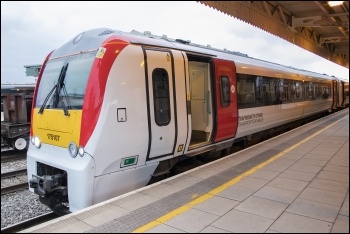 RMT transport union members in train fleet maintenance in Wales are planning to strike against a threat to their job security, pensions, pay and terms and conditions.

A resounding 98% voted in favour of strike action on an 80% turnout, which should give confidence to union members everywhere that with the right approach it is possible to defeat the Tory anti-union laws.

Members will begin an overtime ban on the 3 June and the first 48-hour strike on 8 June because new franchise holder 'Transport for Wales' wants to transfer the workforce to contractors, especially Stadler and Spanish firm Construcciones y Auxiliar Ferrocarriles (CAF), rather than include them in the firm employing all other rail workers.

CAF is currently involved in locking out workers in New Zealand. Union members here are correct to fight against being handed over to companies like CAF without assurances and the whole trade union movement should rally to support them.

The union campaigned for the service to be taken into public ownership and said it was "appalled and angry" that the Labour-run Welsh Government not only handed the franchise to private company KeolisAmey (which run it through the Transport for Wales front in order to give the impression that it is publicly owned) but also opted to privatise the Network Rail workforce too.

It's now trying to outsource this group of workers to subcontractors without guarantees on job security and conditions.

The RMT is in a powerful position. Thanks to decades of underinvestment by the private companies that run Wales' railways (particularly the hated previous franchise holder, Arriva Trains Wales), the trains and track are far below the standard needed for a reliable modern rail system and rely on maintenance workers to keep the literally creaking infrastructure moving.

Last October - just a month into Transport for Wales' tenure - a third of trains were put out of action by bad weather. Maintenance workers are angry that their reward for the extra effort they put in to get the trains moving again last autumn - including during rugby internationals when 100,000 people can travel to the city - is being rewarded a few months later with an attack on their job security.

Arriva had the highest subsidy per passenger per mile of any rail company in the UK and one of the worst records on cancellations and delays. Passengers partied in an event called through social media when Arriva's tenure was over, but they are now accusing Transport for Wales of having "gone Arriva on us".

It's a far cry from Transport for Wales chief executive James Price's claim that "the service will be unrecognisably better for people" and "one of the best in the world."

The problems on our railways won't be solved unless we tap in to the experience, knowledge and expertise of railway workers who know the business best, and let them control and manage the service in conjunction with passenger representatives and the wider working class in a publicly owned railway system.

No problems will be solved by handing them over to the most profit-hungry of private companies, who have proved time and again their willingness to sacrifice the interests of passengers, the workforce and service for short-term gain. Everyone who travels on the railways should support the action of RMT members: they're fighting for us all.