A stuttering capitalist world economy has jeopardised steel making in the UK. Already the Redcar plant on Teesside has been closed, Tata Steel has announced huge job cuts throughout the country, and Caparo Industries steel division has gone into administration. Other manufacturing plants, such as Crown Packaging, are also closing or facing big job losses, wrecking livelihoods in working class communities. Such calamities also undermine Tory chancellor George Osborne's boast of a sustained economic recovery in the UK.

But workers do not have to accept the inevitability of closures and unemployment. Recently, striking workers at Air France cornered their job-slashing bosses, literally ripping the shirts off their backs!

The workers' militancy has been rewarded with concessions to planned 2,900 job losses as part of the company's 'restructuring programme' (despite the company reporting a €1.6 billion annual profit).

The UK trade unions representing manufacturing workers should demand the nationalisation of plants threatening large-scale redundancies and a plan of continuing production as part of a socialist economy. 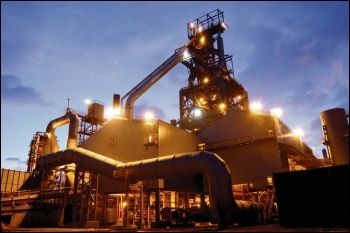 Nationalise to save jobs and communities

The steel industry is "in crisis" and needs "life-saving surgery", Gareth Stace the director of UK Steel has warned. Tata Steel announced 1,200 job cuts at sites in Scunthorpe and Lanarkshire. This follows the closure of SSI's plant in Redcar, Teesside where 2,200 jobs have been lost.

It is estimated that for every sacked steelworker another seven jobs will go in the supply and service industries. Construction equipment companies Caterpillar and JCB have already shed hundreds of agency workers and are now making redundancies from their full time workforce.

500 staff workers at JCB will go in the next few days and shop floor redundancies are set to follow. This April, JCB announced its second best annual profit margin in its 70 year history of over £300 million.

Caterpillar employs over 100,000 worldwide and has announced it will cut its workforce by 10,000. It wants to close 20 manufacturing facilities over the next three years and is not ruling out the closure of its Desford plant in Leicester with the loss of 1,500 jobs. Metal Box in Wales is also threatened with job losses.

In other words, let global capitalism run its course in determining the livelihoods of thousands of skilled workers. This crisis is a result of the continuing economic catastrophe caused by the billionaire bankers, speculators and spivs. We will not pay for this with our jobs.

The trade unions cannot allow this to happen and in the first instance should immediately convene a national joint conference of all the unions involved. This should be led by the shop stewards from the various plants to plan a united fightback against these redundancies.

The unions should be demanding the opening up of company accounts to inspection by the workforce and opposing all jobs losses. Private and public workers need to unite to fight the jobs slaughter.

Labour leader Jeremy Corbyn has re-popularised the idea of nationalisation through his election campaign, raising the idea of renationalising the rail industry (although he would do this on a gradual basis). He and his supporters should boldly make the same call to save these steel jobs.

Outright nationalisation should be on the basis of genuine democratic workers' control and management.

A step too far? In 1971 Rolls-Royce engines in Derby went bust. Workers took to the streets with demonstrations. Such was the anger that the Tory Heath government was forced to nationalise it in 24-hours.

'You bailed out the banks now save our steel industry'

Scotland's two remaining steelworks at Motherwell (Dalzell) and Cambuslang (Clydebridge) are threatened with closure by Tata steel. This came out of the latest steel crisis summit on 16 October.

The closure threat came while the Scottish National Party's (SNP) national conference took place. First Minster and SNP leader Nicola Sturgeon announced she would "leave no stone unturned" and would set up an emergency taskforce involving employers and trade unions to try and save Scotland's steel industry.

The SNP has already come under pressure to take action by nationalising the Tata sites, with finance minister John Swinney being asked about this directly in media interviews.

Public anger is being expressed over the lack of protection for Scotland's steel industry with the SNP government awarding contracts to Chinese steel suppliers for the Forth road bridge contract in 2012.

As the experience of the SNP taking a pro-big business stance over ScotRail and Calmac ferries shows, it's likely the SNP, unless forced by mass pressure, will only ask for a Westminster subsidy. Or they may use Scottish government funds and try and get the taskforce to agree a short-time working arrangement to keep Motherwell and Cambuslang open.

The Socialist in Scotland spoke to Callum Munro, communications and research officer for the trade union Community: "Community want all options on the table of the taskforce, everything should be done to avoid compulsory redundancies. Community is willing to discuss the issue of 'short-time working' which has happened before. But the issue of temporary nationalisation of these assets shouldn't be discounted which has also worked previously in the steel industry".

The recent example of Redcar shows the trade unions may need to act quickly to prevent mass redundancies. Soon after SSI announced the "mothballing" of the steelworks, while the Tory government put no pressure on SSI bosses, liquidators stepped in and closed the site in a fortnight.

In the view of the Socialist Party Scotland it is critical that the trade unions, such as Community, mobilise a fightback of the workforce for nationalisation of the steel industry and no redundancies.

This would quickly gain active mass sympathy from the public. Action is needed before Tata bosses are given grace to walk away leaving workers on the scrapheap, as SSI did in Redcar.

Mass pressure, organised by the workforce trade unions, should be brought to bear on the SNP government to nationalise the Motherwell and Cambuslang plants. Also for united mass action with the workforces at threatened Scunthorpe and Port Talbot, Tata sites and all steelworkers, demanding nationalisation of the steel industry.

Scottish Labour leader Kezia Dugdale has also said "everything should be done to save Scotland's steel industry jobs".

If Labour under Jeremy Corbyn is now an 'anti-austerity' party Corbyn and shadow chancellor McDonnell - who claimed that speaking to the devastated families in Redcar changed his view of whether voting for the fiscal charter was the correct tactic - should make a clear call for nationalisation.

Labour should give full active support to a mass campaign for nationalisation. This would give confidence to trade unionists, the workforce and communities threatened with devastation by these closures.

Already there is mass public outrage at the steel bosses' economic vandalism, reflected in the homemade placard of a Redcar steelworker shared widely on social media: "You bailed out the banks now bail out/save our steel industry".

While the pressures of the world market are real, it's certain Tata and other steel bosses are trying to force governments to either subsidise their profiteering, or they will move production to lower cost workforces abroad.

The Tory government cannot be trusted. It is involved in lucrative deals over Chinese investment in the development of the UK's nuclear energy sector. We need mass pressure to bring the plants into public ownership.

It is also likely that even if a subsidy was agreed by Westminster or the Scottish government, Tata - like all major corporations - would prioritise profits over long term investment in jobs. Also, a subsidy could not permanently overcome pressures of the world market.

Steelworkers may also be asked by companies and the government like Tata to give up hard fought terms and conditions through short time working as the price of protecting jobs through a subsidy.

The record of the Tory Westminster and SNP Scottish governments show they would rather workers' pay the cost of this crisis than big business.

Recently the workforce at Tata has shown a willingness to fight back, returning a huge mandate for strike action in the national strike ballot in May over pensions that brought Tata bosses to the table with a serious offer.

Redcar - more than a century of steelmaking at stake

The remaining SSI steel workers at Redcar finished their final shift on Friday 16 October marking the end of 160 years of steel production on Teesside. 2,200 workers are facing redundancy in an area of high unemployment and high levels of poverty.

The closure of the Redcar Steel plant will have a far wider impact on the local economy and service industries. The Tory Government has announced a package of £80 million to support workers to gain new jobs.

However, what jobs are likely to be on offer? It is also reported that the redundancy payments will come out of the £80 million as SSI has gone into receivership.

This the second time in five years that the plant has faced closure. The last time was under a Labour government and at the following general election the Redcar Labour MP lost her seat to the Lib Dems. The plant only reopened in 2012 due to investment from SSI.

Local Labour MP's have been supportive and have raised the issue in parliament, one even going as far as to call for renationalisation of the steel industry. Local Tory MP James Wharton, however, has called it a "distraction" from the Northern Powerhouse - a government quango set up to revitalise the northern economy.

The steel industry has been significantly reduced since it was privatised under the Thatcher government following a bitter industrial dispute in the early 1980s.

Unfortunately when faced with the prospect of the current closure, Community, the union representing the majority of the workers, failed to launch a campaign or put forward a strategy to defend their members' jobs and keep steel production on Teesside.

There remains a high demand for steel but many projects are being built mainly with steel imported from China. This is the same as in the production of wind turbines and other projects.

Tariffs on steel imports, as raised in the recent steel summit, will do little to save steel production in the UK. Under capitalism, saving jobs in one sector of industry through tariffs on imports will lead to jobs losses elsewhere as a result of higher prices.

Only renationalisation can save the industry with a programme to use steel in socially useful construction projects.