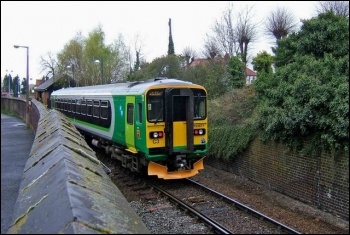 London Midland will vanish from the face of the earth at 1.59am on 10 December.

My train operating company is being taken over by a consortium of companies headed by Abellio which is the foreign arm of the Dutch state railway. Abellio also runs Scotrail, Greater Anglia and Merseyrail.

What has been known as London Midland will be split into two new identities: 'West Midlands Trains' and 'London Northwestern'.

Millions of pounds have been spent by both Govia, the outgoing owner, and Abellio in bidding for the franchise and millions will be spent by the state subsidising the operation going forward.

Abellio will of course be taking its cut and will send profits back to the Netherlands. 75% of Britain's rail operators are foreign owned today.

All of our trains will be repainted with new livery, stations will get new signage with a new logo and staff will be given new uniforms.

We have been instructed to remove all posters, stationery, umbrellas, mousemats and even London Midland branded mugs from kitchens.

There is an atmosphere of trepidation caused by the transition, which is not helped by the woeful lack of information provided to staff regarding their future employment.

We have already been told that some work currently done by our customer relations team in Birmingham will be transferred to a site in Scotland from day one of the new franchise. All grades and departments should be prepared for attack by the new owners.

Abellio has gained a brutal reputation from its stewardship of Scotrail, Merseyrail and Greater Anglia.

At all three companies workers have taken strike action against the firm's attempts to force through driver-only operation to get rid of guards.

London Midland has so far utterly failed to engage with its recognised trade unions in any meaningful way and unions are now threatening legal action for failure to comply with TUPE regulations such as allowing reps to meet and consult members during work time. We are being kept in the dark and we are angry about it.

Abellio need to know that we are ready for a fight. As far as we are concerned they are just another bunch of spivs on the railway gravy-train who are fundamentally no different to the last bunch.

We are ready to fight to defend our jobs and conditions, for safety and against driver only operation.

The RMT has been here since long before this group of bandits and we will still be here when they've gone.