As we go to press, public sector workers - including in the NHS, local government, colleges and the civil service - are due to take part in rolling strike action on 13-15 October. Two trade union activists say why they are striking. 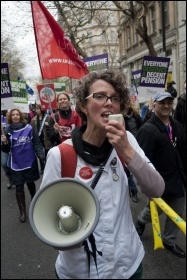 For the first time in over 30 years health workers in England have overwhelmingly voted for national industrial action over pay.

On 13 October, tens of thousands of NHS staff will be on strike over what - even by the standards of this government - is an insulting and arrogant offer.

Incredibly over 60% of NHS workers will receive no pay rise at all, while the rest will get just 1%, and even that is almost worthless since its non-pensionable, and cannot be used to calculate unsocial hours and other enhanced payments.

It's clear that not only will the pay freeze continue for years, but the government is also preparing to attack weekend rates of pay.

All this on to top of a 10% cut in real pay since 2010! Is it any wonder then that health workers are angry and ready to strike?

However, it's not just the onslaught on their living standards that health staff face. The huge financial cuts that have been inflicted on the NHS have put huge pressure on workers. Workloads and stress levels are at an all-time high, as often tired and exhausted staff attempt to provide a good standard of service.

Also alongside all these issues is the ever present threat of privatisation, which is accelerating after the reforms of successive governments.

Most health workers know we will not be able to achieve anything unless we are prepared to fight. The vote not only shows that we are prepared to struggle, but it also gives a warning to the Westminster politicians and employers that workers everywhere will no longer accept austerity and the dictatorship of millionaires, and are preparing to move into action. When that happens, nothing can stop us.

We've had our pay frozen in the civil service for the past four years. Workers everywhere are being degraded and humiliated, despite workload increasing through the roof. I know I have never felt so undervalued.

On top of this, our manager recently announced a month of 'treasure hunts' around Leicester to promote health and wellbeing. Maybe if our staff weren't working every hour god sends in overtime to supplement their inadequate income, they'd have the time and energy to exercise - but of their own choice! My entire office was incensed by this patronising scheme, telling management: 'We don't want treasure hunts, we want decent pay!'

The fact that this government will not even pay their own employees a decent wage in one of the most affluent countries in the world is a damning condemnation of capitalist society.

I will be out on strike on 15 October with my fellow PCS union members in the civil service, fighting for the pay rise we so richly deserve.