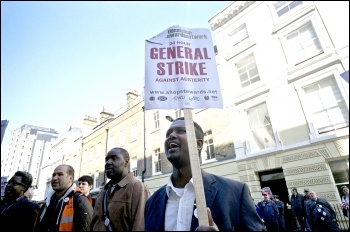 NSSN lobby of the TUC general council meeting in April 2013, demanding they name the day for a 24-hour general strike, photo Paul Mattsson   (Click to enlarge)

'Cut, cut, cut' go the Con-Dems as they attack pay, welfare, jobs, services and pensions. No wonder the mood for action against the government's austerity agenda is growing.

Teachers in the NUT and NASUWT unions have called a rolling programme of strikes, culminating in a national strike in the autumn. Lecturers in the UCU are consulting about strike action over pay. CWU members are preparing to fight the privatisation of Royal Mail. PCS civil service union members are discussing further action to defend pay, jobs and working conditions. FBU members are balloting over pensions. Unison members in Scottish local authorities are balloting on pay. All workers have a reason to strike - let's do it together. Come to the lobby of the TUC to demand a 24-hour general strike. 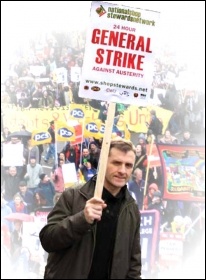 The Con-Dem government has announced a stock market floatation of the majority of Royal Mail within nine months, with the rest to follow at a later date. This is the biggest potential privatisation since the dark days of Thatcher. It threatens a national service which has been in public ownership for 479 years. It puts the universal service under threat, almost certainly means higher postage rates, and is a major threat to postal workers' jobs and working conditions.

In its recent consultative ballot CWU members voted by 96% in opposition to privatisation on a 74% turnout. The union must now capture this mood. The CWU has announced that it will have no choice but to proceed with an industrial action ballot if it can't get a watertight agreement on protection of its existing national agreements.

The CWU should call for all the unions under attack to build united action. There is no time to waste. A 24-hour general strike would be a serious blow to all the government's cuts and privatisation plans.

Teachers will build on the success of recent strike action in the north west, with 90% of schools closed or partly closed. Further action has been called by the NUT and NASUWT.

In the week commencing 30 September there will be strikes in the Eastern, East Midlands, West Midlands, Yorkshire and Humberside regions and in some of Wales.

In the week commencing 14 October there will be strikes in the North East, London, South East, South West regions and in the rest of Wales.

And there will be a one-day national strike before the end of the autumn term.

"NUT and NASUWT members have every reason to build the strongest possible action to defend our pay, conditions and education. However, we are not the only unions looking to oppose attacks on our livelihoods and our services. Instead of striking separately, wouldn't it be better for unions to strike together and have the biggest possible impact?" 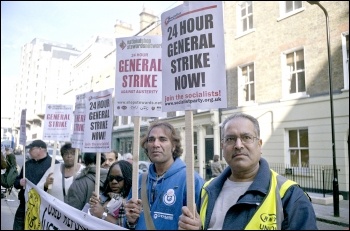 NSSN lobby of the TUC general council meeting in April 2013, demanding they name the day for a 24-hour general strike, photo Paul Mattsson   (Click to enlarge)

Lobby the TUC conference - For a 24-hour general strike!

For more information and a model resolution on the lobby see: www.shopstewards.net