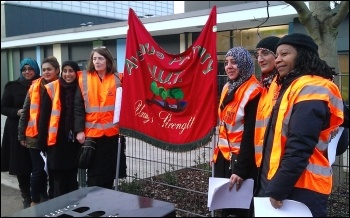 Teachers on strike on 12 February 2014 over changes to pay, photo by Bob Severn   (Click to enlarge)

Teachers at Avenue Primary School in Newham, East London, took strike action on 12 February as the school has broken away from national pay agreements.

Tory education minister Michael Gove has allowed schools to set their own pay policy in order to cut teachers' pay. But schools can choose to keep to existing arrangements.

The new pay scheme has sixteen points on the scale instead of nine. This means that teachers could get a smaller pay rise for each year worked than in other schools. It makes it harder for teachers to show they should get an annual pay rise. 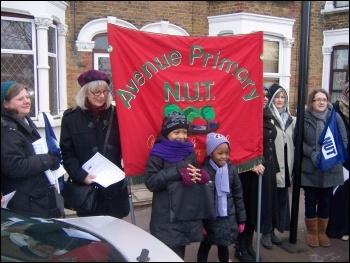 Teachers on strike on 12 February 2014 over changes to pay, photo by Dave Carr   (Click to enlarge)

The teachers think that having to prove they are meeting targets for a pay rise will take them away from the important job of teaching.

National Union of Teachers executive member Martin Powell-Davies said: "The new points scheme is playing divide and rule, trying to put teachers against each other and putting more stress on observations. But working as a team, sticking together, teachers can stop what's wrong, like this pay plan."

Another two days of strike action is planned for the first week of March if the school does not back down.

Teachers welcomed the idea of standing Trade Unionist and Socialist Coalition candidates in the 22 May local elections. Every council seat in Newham is currently occupied by a Labour Party member. Yet it seems, through Local Authority appointed governors, they are supporting schools breaking away from the national pay scheme.

This version of this article was first posted on the Socialist Party website on 12 February 2014 and may vary slightly from the version subsequently printed in The Socialist.