There was standing room only as hundreds of trade union activists attended the National Shop Stewards Network (NSSN) rally and lobby of the TUC in Brighton on 13 September. There were cheers and applause when the chair, Linda Taaffe, mentioned the victory of Jeremy Corbyn in the Labour Party leadership election, demonstrating how it has lifted the confidence of all those who oppose austerity.

Along with this new mood is an ever-growing call for the TUC to call for mass, coordinated strike action to defeat the vicious new anti-trade union bill. Andy Richards, president of Brighton Trades Council, in opening the rally committed the trades council to supporting this action. This in many ways set the tone of angry opposition from each speaker to the anti-trade union laws and a commitment to fighting them.

Mick Cash, RMT transport union general secretary, deplored that there is some opposition to generalised strike action on the TUC general council, in contrast to rank-and-file reps and members, demonstrating the importance of the lobby. 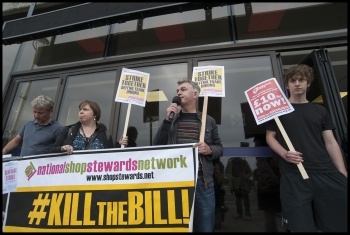 "The victory yesterday by Jeremy Corbyn has changed everything. The vote we saw yesterday was a political revolution. We must build a mass movement against austerity and the anti-union laws.
The message must be simple - 'Cameron: we are going to take you down. Your anti-union bill and your cuts, you're going down because we are mobilising against you'.
If this goes into law, we want mass coordinated strike action." 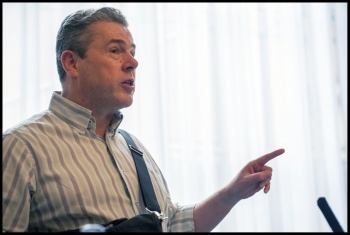 Mark Serwotka, leader of the PCS civil servants' union, called for united coordinated action on pay before going on to say:

"You have to pinch yourselves that a Labour leader is saying things that all of us agree with. If we are going to see any of those policies realised, we will not get that just through what Jeremy Corbyn and the Labour Party do in parliament.
If Jeremy Corbyn wants to win on those policies, he absolutely needs a mass vibrant movement. He needs the six-and-a-half million trade union members to ensure that we have that vibrant campaign through strikes, demonstrations, local campaigns, occupations."

Mark finished by stating that we must not allow the new laws to stop strike action and if the government follow through on their threat to use agency staff as scabs, there "must be mass pickets to stop them."

Unite executive member Suzanne Muna, a rep in the Unite housing workers' branch, speaking in a personal capacity, called on the TUC to "act as the collective voice of the trade union movement" and to not only oppose the current anti-trade union bill but "repeal all the anti-union laws".

Dave Ward, CWU general secretary, hit headlines in the summer for his claim that there was a "virus" in the Labour Party and that Jeremy Corbyn was the "antidote". He spoke of his and the CWU's commitment to developing their relationship with the NSSN and said: "The NSSN is at the core of what trade unionism is all about." 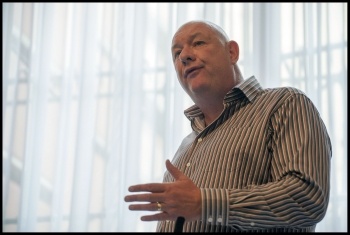 He was followed by John Vasey, a sacked Royal Mail rep, who is awaiting his appeal for unfair dismissal. John was sacked on a charge connected with alleged non-delivery of election material and spoke about the culture of threats and victimisation that is in place at his workplace and across Royal Mail. The NSSN calls on everyone to support John's campaign for reinstatement. 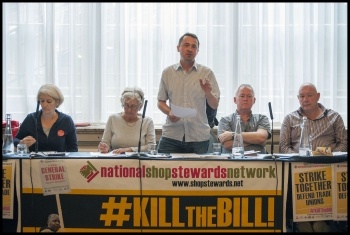 In every contribution the demand for the TUC to provide leadership and act boldly was raised. Ronnie Draper, leader of the bakers' union, said that he and "thousands" of other union members were prepared to go to jail for coordinating 'illegal' strikes if the new Tory laws are passed. He said: "I don't want to go to jail comrades - but I tell you, I will. And there will be thousands of others willing to as well."

He stated his belief that because of the government's plans to "gag" trade union members and make picketing almost illegal, the 2015 TUC congress is the "most significant for years." He ended by highlighting victories like at Gunstones bakery and in Pizza Express as guides to action and what can be achieved. 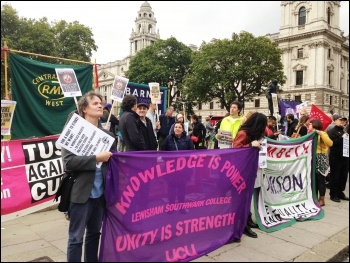 Trade unionists gathering near parliament for a Kill-the-Bill protest called by the bakers' union, 14.9.15, photo by Paula Mitchell   (Click to enlarge)

Isai Priya, a young Usdaw shop steward in Tesco and Tamil Solidarity activist, spoke (in a personal capacity) about the current refugee crisis and the role the workers' and trade union movement can play, finishing with a demand to bring more migrant workers into trade union membership: "Go out and recruit a migrant worker today!"

Another young activist, Corinthia Ward from Youth Fight for Jobs, described the brilliant anti-austerity action they organised in Birmingham during the summer and how Youth Fight for Jobs wants to link up with trade unions to fight for a £10 an hour minimum wage, taking inspiration from the fight for $15 an hour in the United States.

"Prison officers have been criminalised when taking strike action for 21 years", reported POA general secretary Steve Gillan. "Since 1994 we have not been allowed to take lawful action. Our mantra is, if our members want to take action, we will." He ended the rally by explaining that this mantra should be taken on by all in the trade union movement as the Tory government looks to silence trade unions.

After the rally, a lobby took place outside the TUC congress as delegates arrived, with the NSSN supporters waving placards demanding to 'Strike together to defend trade unions!'

Cameron's Trade Union Bill is an extension and deepening of Thatcher's laws of the 1980s that were shamefully retained by the New Labour governments of Blair and Brown and delegates to TUC, from Unite, NUT, Usdaw and others spoke further during the lobby on the need to defeat it.

Organised from below, growing pressure on the tops of the TUC, allied to those unions and workers determined to take action, alongside the momentous victory of Corbyn, can lay the basis for historic steps forward in the months ahead.

This version of this article was first posted on the Socialist Party website on 15 September 2015 and may vary slightly from the version subsequently printed in The Socialist.